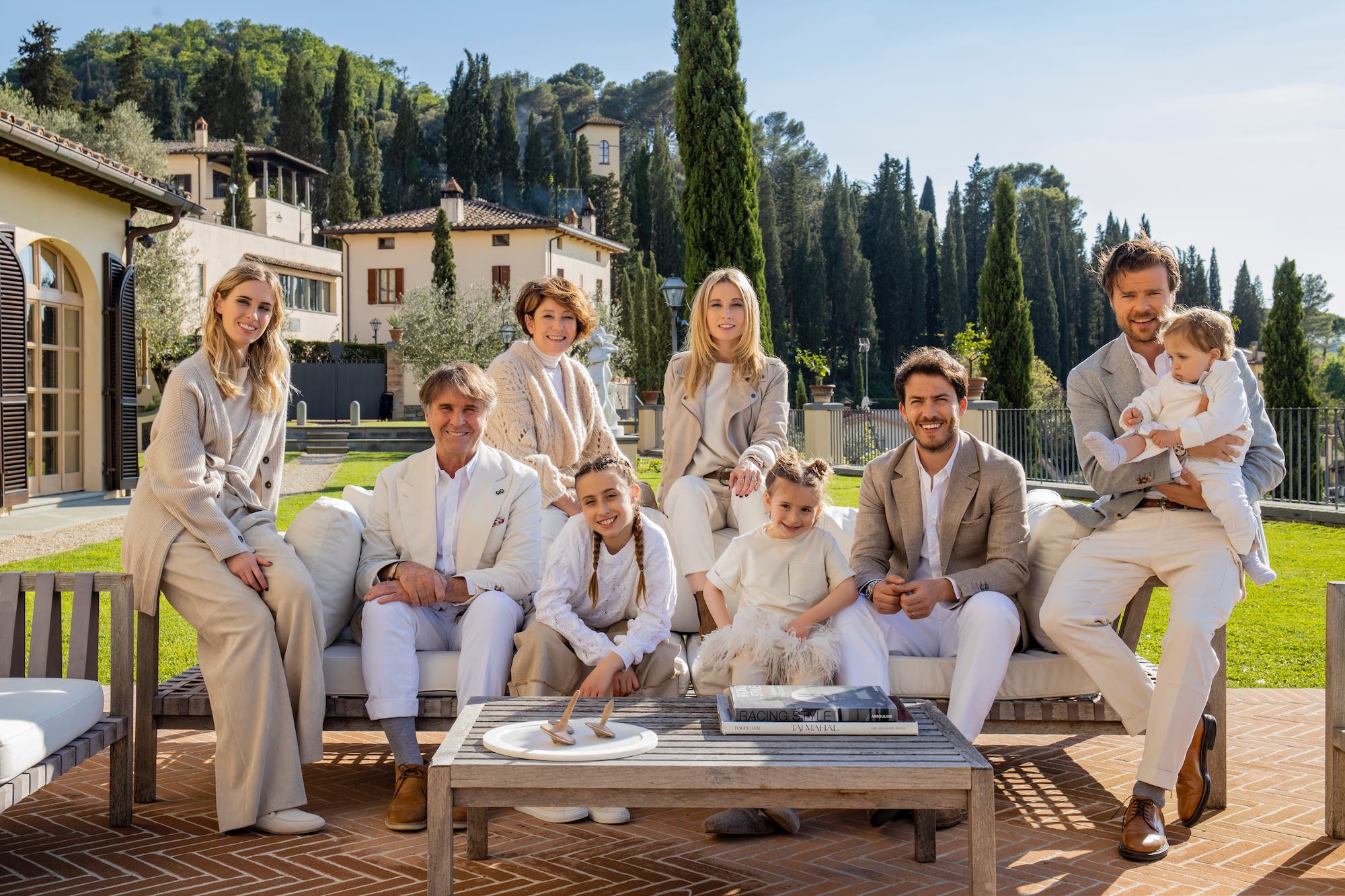 The NMG Awards are an embodiment of our relentless commitment to our brand partners, connecting them to our luxury customer in an entirely new way. We are recognizing, and celebrating with the fashion industry, those who are inspiring our collective mind to shape the future of our field.

Brunello Cucinelli is celebrated as representing the pinnacle of luxury with products focused on craftsmanship, quality, creativity, and exclusivity.

I am flattered and full of gratitude toward Neiman Marcus, one of the world’s highest expressions of fashion and luxury. I sincerely thank Geoffroy van Raemdonck and all the collaborators whom we have had the pleasure of working and engaging with throughout these fruitful twenty years. The prestigious acknowledgment that I am being awarded fills me with joy and makes me feel extraordinarily honored. Especially because I believe it is not just a splendid gratification bestowed on the work of our fashion house, but also an exceptional confirmation of the great appreciation that the whole world nurtures for the value of craftsmanship of the highest quality, of Made in Italy and, I am certain, also for our way of living andworking, what we here in Solomeo like to define as being ‘in harmony with Creation,’ a living form of universal attraction.

Among Brunello’s many contributions to our industry, he has made particular impact through his elevated luxury lifestyle design that recognizes the luxury customer’s desire for impeccably crafted, artfully made pieces. Our customers collect his designs like they are works of art; it’s a testament to the superior design, quality, craftsmanship and allure of his brand. I am honored that Brunello chose to express his creativity to our luxury customers through the World of Cucinelli, in Neiman Marcus’ very first co-branded collection. It is a beautiful nod to our special relationship.

Brunello Cucinelli is a pioneer in its purpose-driven legacy and commitment to the community. This recognition is the first time Nieman Marcus has announced a recipient in seven years.

History of the Nieman Marcus award

Leaving a Lasting legacy in Solomeo, the “Hamlet of Cashmere and Harmony”

Brunello Cucinelli’s operations are based in Solomeo, a small 14th-century medieval village in the Umbria region of central Italy. The individuals designing and producing some of the world’s most luxurious products call this place home. Solomeo lies deep in Brunello’s heart, representing the core of his family and business. The idea of gathering here all of the symbolic aspects of his life came to him in 1985: it was an unconventional choice that ran counter to the trend in those years. More recently, the business, initially established at the castle, was relocated to the valley below; the ancient medieval buildings now host the School of Contemporary High Craftsmanship and Arts classrooms. Cucinelli has spent years restoring the village for the community – and his teams – to live and work. In addition to the school, significant projects include opening The Forum of the Arts in 2008 and his current project: The Universal Library.

2010: Received “Honorary Degree in Philosophy and Ethics of Human Relations”, University of Perugia, a tribute to his merit as a humanistic entrepreneur

2017: Awarded Global Economy Prize For World Economy from Kiel Institute for “perfectly embodying the figure of the honorable merchant”

2018: Accomplished Honorary PHd in Philosophy by the University of Messina and described as “a concrete thinker, a cultural promoter and true patron of our times”

2021: Received “Designer of the Year” Award by GQ UK for “his humanistic commitment as a designer, as an entrepreneur and for his many human sustainability projects”

2021: Invited to speak at G20 about his idea of “Humanistic Capitalism and Human Sustainability” to World Leaders and his Royal Highness Kind Charles

2022: Accomplished “Honorary Doctorate in Management, banking, and commodity sciences”, the University of Sapienza in Rome

Brunello Cucinelli was born into a peasant family in Castel Rigone, province of Perugia, in 1953. After obtaining a diploma as a building surveyor, he enrolled in the faculty of Engineering but then dropped out. In 1978 he set up a small company and captivated the market with his idea of dying cashmere. Since he was a boy, he witnessed his father working in an unwelcoming environment and became a close observer of the world, thus developing his dream to promote a concept of work that ensured respect for “the human being’s moral and economic” dignity.

This is a crucial element to understanding his personality and the success of his business, which Brunello considers not only as a wealth-generating entity but also as a framework to develop and nurture his dream of capitalism that enhances the human being. His knowledge of the significant figures of the past has constantly fed his dreams and ideals, but he is always looking ahead toward the distant future, and each action and accomplishment of his is designed to last over the centuries. In 1982, after marrying Federica Benda, Brunello moved to “Solomeo”, which became the venue to make his dreams come true and a great workshop to build his success as an entrepreneur and humanist.

The increasingly international market welcomed his quality products warmly and enabled him to implement his ideals.

In 1985 he purchased the fourteenth-century tumbledown castle in the hamlet and made it into his corporate headquarters; in 2000, intending to meet the market’s growing demand with adequate production facilities, he acquired and refurbished an existing plant at the foot of the Solomeo hill instead of building new facilities.

The “Forum of the Art”, including the Aurelian Library, the Gymnasium, the Amphitheatre, and the Theatre, was built in 2008 and became the ideal venue for culture and art.

The desire to list the company on the Milan Stock Exchange was born around this time and became a reality in 2012. This move was not driven by financial reasons alone, as Brunello saw wider participation in his business activity as an opportunity to spread his ideals of a new capitalism, a truly “humanistic capitalism.”

The experience of the Forum of the Arts, built exclusively by Umbrian master craftsmen, spawned the idea of the “Solomeo School of Arts and Crafts”, established in 2013. Brunello’s vision entails that the memory of an important humanistic factor, such as craftsmanship, is preserved and passed on to future generations; therefore, the school is the workshop where this aspiration becomes a reality.

In 2014, the “Project for Beauty” was presented in Milan, an initiative supported by the Brunello and Federica Cucinelli Foundation; the project entails the creation of three huge parks at the foot of the Solomeo hill (the Agricultural Park, the Secular Youth Club Park, and the Industry Park) recovering part of the property occupied by old abandoned factories and using it to grow trees, orchards, and lawns. This initiative symbolizes the crucial value of earth, “from which all things are,” as Xenophon put it. With this project, Brunello highlights the duty to restore the “dignity of the land,” and he shows that “Beauty will save the world” whenever the world saves Beauty.

The Brunello Cucinelli S.p.A. currently employs more than 1700 people and cooperates with around 4000 subcontractors. Nobody clocks in or out. The working time is from 8 a.m. to 5.30 p.m. with a long lunch break. It is forbidden to work after 5.30 p.m.

Over the years, Brunello Cucinelli has received an extraordinary number of Italian and international accolades for his “Neo-Humanistic Capitalism.” The recognitions which best reflect his human experience include his appointment as Cavaliere del Lavoro (Knight of Industry), assigned by the President of the Italian Republic; an honorary degree in Philosophy and Ethics of Human Relations, a tribute he received from the University of Perugia; the Global Economy Prize, received from the prestigious Kiel Institute for the World Economy with a noble statement declaring that he “perfectly embodies the tradition of the Honourable Merchant”; and the prestigious appointment as Cavaliere di Gran Croce (Knight Grand Cross), of the Order of Merit of the Italian Republic.

NMG Awards is a new platform to recognize and amplify breakthrough luminaries in fashion globally. The platform includes the return of the prestigious Neiman Marcus Award for Distinguished Service in the Field of Fashion, a legacy established by Carrie Marcus Neiman and Stanley Marcus 85 years ago, as well as the new Neiman Marcus Award for Creative Impact in the Field of Fashion, given to recipients showing innovative creative impact and exceptional potential for growth.