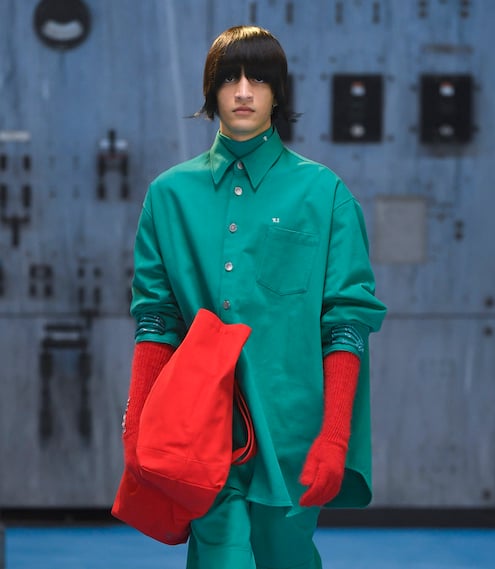 ATARAXIA
a state of freedom from emotional disturbance and anxiety. Peace of Mind. Emotional tranquility.

DICHOTOMY
division into two parts or classifications, esp. when they are sharply distinguished or opposed.

SYNCHRONICITY
an apparently meaningful coincidence in time of two or more similar or identical events that are causally unrelated.

ALLEGIANCE
support for and loyalty to a particular group, person, or belief.

Words and meanings that influenced the RAF SIMONS Autumn/Winter 2021 collection, without hierarchy or intentional sequence. An equilibrium, contrast between disparate elements, unexpected similarities and parallels, a love for and loyalty to particular themes, ideas, inspirations. Juxtapositions and contradictions, with a quiet logic. Fabrications, colours and silhouettes combine notions of couture with youth culture, a process of elevation and respect.

The re-scaling of garments suggests different form language and new purposes, as does their rematerialisation. References to history are reassuring: the history of both RAF SIMONS, and of fashion, a comfort in their familiarities. Suggestions of different worlds colliding in alien gestures. There is one aesthetic language, but it creates the individual.

The RAF SIMONS Autumn/Winter 2021 show was filmed in the Barenzaal and joining spaces of the C-mine, Genk. The soundtrack of the show is by Kraftwerk.