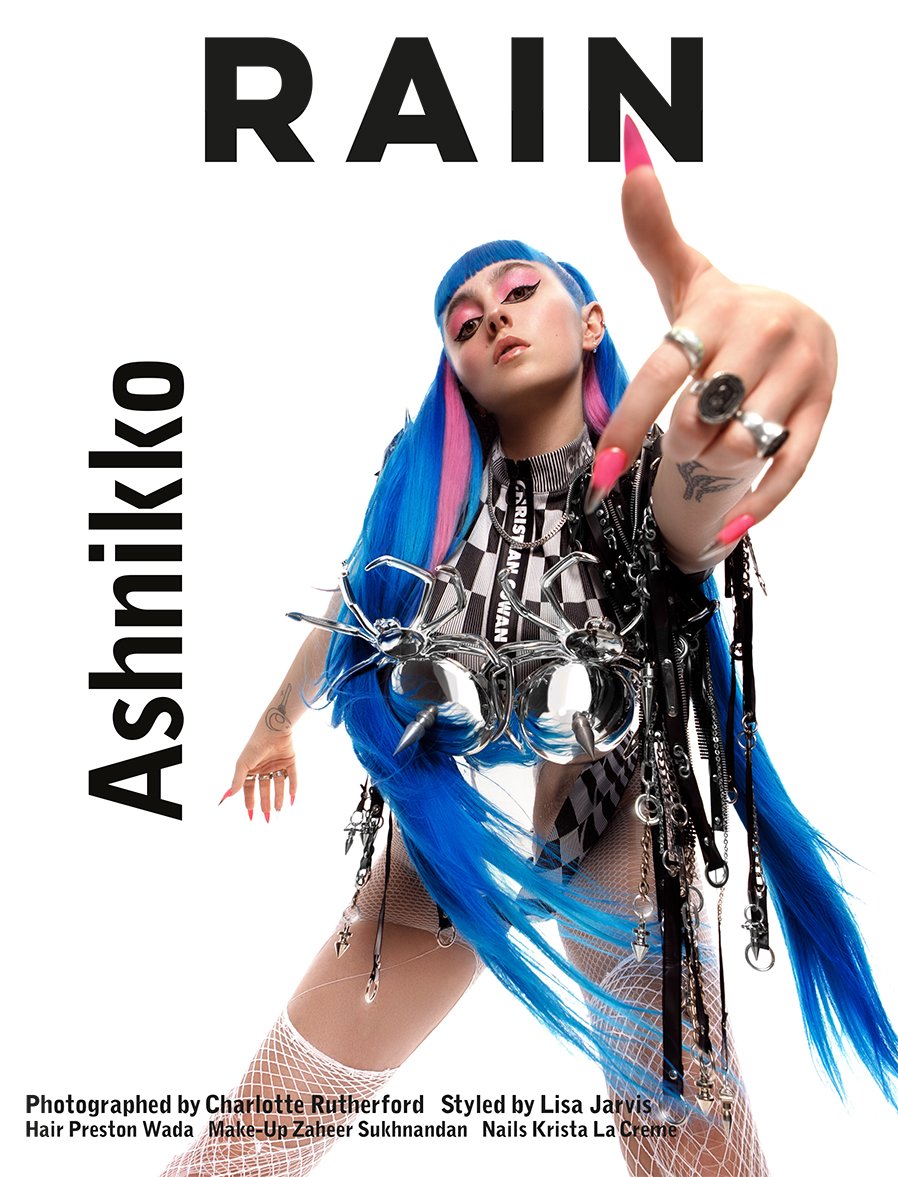 Ashnikko is one of the most exciting new voices in the increasingly alternative sound of pop music. Perhaps this new direction in popular music is the influence of TikTok. Billie Eilish, Lil Nas X, and now Ashnikko have all catapulted to the top of the charts thanks to the viral spread of short videos on the app.

The stranger, the better. One of the first songs of hers to garner attention was “STUPID,” a brutally honest and empowering song about toxic masculinity. Finally, her single “Daisy” recently went viral. Taking inspiration from rock, rap, and punk, Ashnikko’s sound is hard to pin but when you hear one her songs you know its unmistakably hers.

The music of Ashnikko takes a new point of view – a personal and unapologetic perspective that is not only catchy but empowering and relatable. Her music departs from the idealized pop star and sends a message that it’s okay not to conform to society’s norms – and actually to change those norms yourself. As she said to Cool Accidents, ‘Don’t compromise who you are. Being smooth and polished and cool is gross, I’m just winging it.’

In this cover interview feature with RAIN which took place over a year, we explore the early begnnings of Ashnikko and talk about her upcoming album the Demidevil mixtape. Moreover, the new album includes features from some of her greatest influences such as Kelis and Avril Lavigne.

Mark Benjamin: Where did you grow up? How has it informed your music?

Ashnikko: I’m originally from North Carolina; I grew up in Eastern Europe and now live in London. I’ve lived there for about six and a half years. It’s one of my favorite cities. It’s where I feel most at home. I love how living in London has informed my musical taste. I feel like I would be making much different music if I had been in L.A. or New York. Finally, many of my influences are like my friends in London and European artists. It has a bit more edge. More bite.

MB: So, who are some of your musical influences?

A: M.I.A. is a big one because her’s was the first album that I owned. Missy Elliott, Björk, Janis Joplin, Dolly Parton, Niki Minaj, Lil Kim, Paramore, Loretta Lynn…loads of powerful women, like really bad ass women. I think my playlists were predominantly women up until I was 17. I started to think then, ‘guys are OK, too.’ Then I added Odd Future and Tyler the Creator. Finally, Earl Sweatshirt was a huge influence on me; he’s a great lyricist.

MB: It sounds like a lot of punk, rap, and rock.

A: It’s kind of cool. Maybe you can hear some of the influences…I’m trying to at least infuse my music with my influences.

MB: How long had you been in music? I mean you’ve been doing it forever, right?

A: I’ve been writing stories and poems since I was like a tiny baby. I started rapping at 15 and then started singing at 17. I got a vocal coach at 18 to really push and learn how to write songs and be an artist.

MB: Image is such an important thing, but for you it seems like you just do you.

A: I think now it looks effortless, but it has taken so much effort to take it to a place where it looks cool. I was a fucking hot mess just three years ago. Now I’m like, ‘okay, cool.’ This is how I want to dress, how I want to look. I know what I like now. It comes with maturity.

I definitely would not have been as prepared for what’s happening now with my music when I was 18 or 20. It would have been like, ‘fuck, I don’t know what the fuck is going on. I don’t know how I want to look or how to be perceived.’ But now I’m very confident and self-assured. Everything happens in the right time.

“I think self love is a cool concept and it’s easy to say. Love yourself before others come love you, blah, blah, blah, but it’s very hard to actually do.”

MB: There’s a certain genuineness I think that comes across with your image and your music. Furthermore, maybe you say the things people think but maybe are hesitant to say, but it’s all valid. It’s all in there. I think people must connect with that.

A: I’m trying to be very blunt and honest in my music, uncomfortably so for my parents and my extended family, haha. You can always tell what I’m going through by what I’ve written in any given week in my diary. It’s an open diary for everyone to read, which is sad. Maybe I should dial it back a little bit.

MB: Moreover, it empowers a lot of people, too, right?

MB: Your song “STUPID” went viral on TikTok. It’s funny because girls and guys like to lip sync along to it. It’s funny to watch guys do it because the line I think embodies female empowerment.

A: It’s funny because some of the guys changed ‘stupid boy’ to ‘stupid girl.’

A: Yeah, it’s like they’re part of the problem. They’re who the song’s about. They always have a bunch of clowns in their comments.

But yeah I love it when the super e-boys – like the lip biting e-boys with their glossy lips and the middle part in their hair. That e-boy culture is just really funny to me.

MB: Also, tell me about the tentacle penis candle that you sell as merch.

A: My friend was making dick candles, like regular human dicks. When I saw them I was like, ‘Oh my God, will you help me make it in tentacles? We went to her studio and sculpted this tentacle one day and we were laughing the whole time.

The scent is pumpkin spice and it’s really fun. Seriously, I’m branching out with the merch. I want it to be like a full merch line of all really funny things.

MB: Tell me about your songwriting process. Also, was something happening when you wrote “STUPID”?

A: Firstly, I have so many notebooks and I keep a Google doc on my phone. I’m always thinking about lyrics. I’ll be walking down the street and think of something then when I’m in sessions I go into the Google doc and write it all down and take it from there. But yeah, I like to write really silly lyrics that make me laugh. For ‘stupid boy,’ my ex is a little shit. Basically, I feel this year is the first year I feel like a very confident person, whereas before I felt I was treading water and trying to learn how to love myself.

I think self love is a cool concept and it’s easy to say. Love yourself before others come love you, blah, blah, blah, but it’s very hard to actually do. This year I was like, ‘Oh wait, it makes sense for me now. It’s great. I don’t really need anyone else to make me happy. I think I can do it on my own. And I finally understood it.’ Because you know when somebody tells you something; when people give you relationship advice and you’re like, cool, we actually have to experience it yourself.

I realized I absolutely don’t need to babysit an immature man child. Like literally, I’m too good for you. Like, I’m so done. I’m so fine on my own. I actually enjoy my own company more right now. I feel myself musically, aesthetically, emotionally, mentally, everything. It was like me growing up a little bit. It’s the first body of work that I’m entirely in front of. In fact, it’s a rare thing to be happy with your work, but I’m happy for now.

MB: Is it hard to like your own work?

I love my work, but then I listen to it too much until I get to that point where I find something I don’t like. If I make a really good song, I’ll listen to it a lot until I hate it. And then management is like, ‘do you want to put this out?’ And I’m like, ‘no.’ Yeah, no, you’ll have to perform it live. I’ll probably be performing ‘STUPID’ for the rest of my life. It’s alright though.

MB: Recently your single ‘Daisy’ popped off, and now you have this exciting coming album the “DEMIDEVIL” mixtape. How has your approach to music developed or changed over the past year since your initial successes?

A: I’ve had to learn to not let pressure from label, fans, management, etc., affect my songwriting process. I just go into the studio and make what feels good, not what I think people want to hear!

MB: The collabs teased on “DEMIDEVIL” are really cool: Kelis, Princess Nokia, and of course Grimes on “Cry.” How was it like collaborating with them for this album? Secondly, were these artists you have been inspired by?

A: It was a dream! Kelis is someone I’ve been listening to since i was like 11! She’s a huge reason why I even make music! Having her sampled on a song is a dream! Princess Nokia and Grimes are artists that are so unapologetically themselves, so true to their art, and I’m so happy to have them on the project. They are actual dream features on “DEMIDEVIL.”

MB: The album art is so damn cool. How did you come up with it as the cover and how does it visually represent the music?

A: I was watching “Avatar: The Last Airbender,” and I was like, ‘ah-ha!!! That’s it!!!’ I need to be riding a great floating beast like Appa! So, I called Vasso Vu, my creative director, and he made it a reality with Karlifetz and Markus Langen, two amazing artists.

MB: The music video for “Daisy” is too good! Tell me about what inspired some of those scenes. Any other music videos coming you’re excited about?

A: Let me start by saying Charlotte Rutherford is a legend. She’s such a good director and I love working with her. We’ve done my next music video together as well which is probably my wildest one to date. The ‘Daisy’ concept was driven by the four color schemes: yellow, pink, blue, and red. The yellow scene was based on how bees actually see color which i thought was super interesting!

MB: How was the experience of the Brit Awards this past year? The images I saw were iconic.

A: There was pain. There were tears. There was the weight of two toddler sized children hanging from my scalp. It was worth it.

MB: I read you’re a huge fan of Avril Levigne and your song ‘L8r Boi” is a rework of Avril’s ‘Sk8r Boi.’ Can you tell us about it?

A: It’s exactly that! I just reworked the lyrics to be a bit more modern and switched the beat up to make it mine! That’s my fave song on the mixtape.

MB: Finally, I know performing live was such a shift for you before and now we’re in this era of pandemic with few live performances. And I feel like your image and reach to your fans is already so digital. How’s it been for you not seeing fans live?

A: It’s super weird. In fact, it’s so surreal to have songs doing well and to not have any real life interactions with the people who are enjoying them. It’s sad but I think the performances will be even sweeter when they start up again.