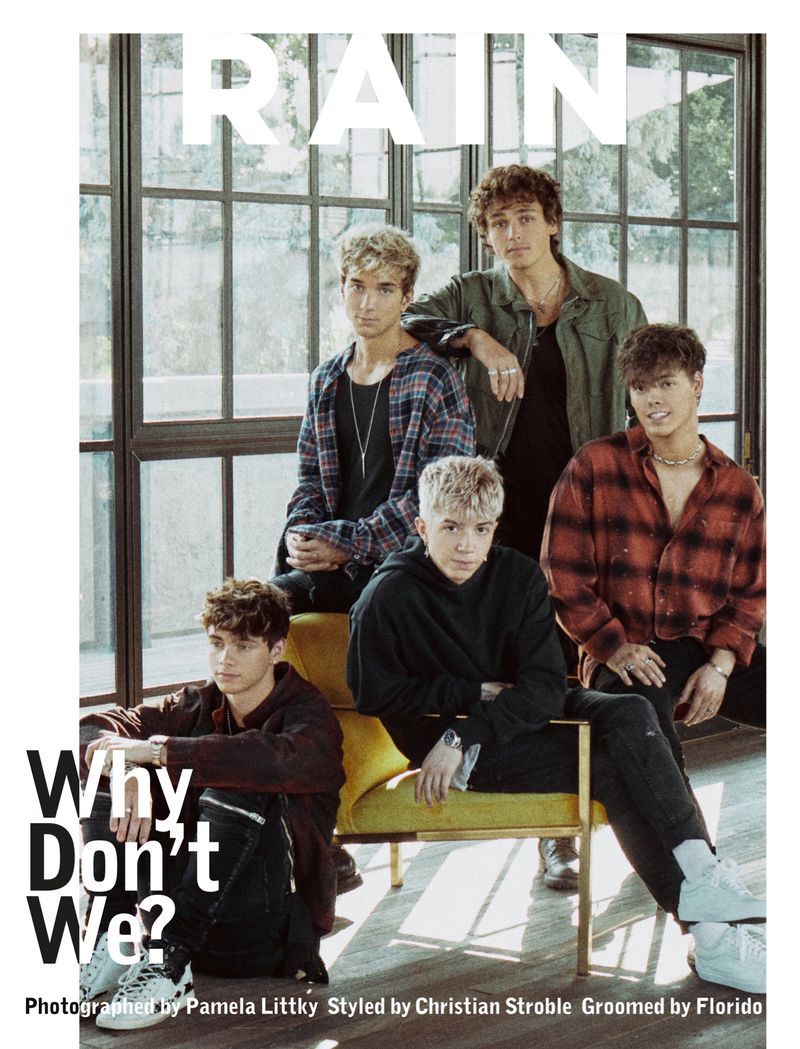 Why Don't We (WCW) photographed by Pamela Littky, styled by Christian Stroble, Grooming by Florido

Why Don’t We (WDW), comprised of band members Daniel Seavey, Corbyn Besson, Jack Avery, Zach Herron, and Jonah Marais covers RAIN as they release their second studio album, The Good Times and The Bad Ones. Drawing on influences from alt rock, electronic, and pop, the new album includes collaborations with Travis Barker and Skrillex.

A sign of things to come, the album opens with a bold rift on “Fallin” that recalls the uninhibited energy of Marilyn Manson’s “The Beautiful People.” Like “Fallin’,” this is an album that strikes a balance between reflection and carefree optimism. Some songs infuse west coast influences from The Eagles or the Red Hot Chili Peppers, whereas others fuse shoe-gaze and The Weeknd. A noteworthy track, “Slow Down” samples the iconic ode to youth and carefree living, “1975” by The Smashing Pumpkins.

Perhaps the most compelling song on the album, “Lotus Inn” seems like an effortless radio ready hit. The song was inspired by a fictional casino in Percy Jackson & the Olympians as the band explains below. We caught up with Why Don’t We to chat about their new album (stream below) and what’s to come in this exclusive feature interview.

Mark Benjamin (RAIN): Tell me about the new album, The Good Times and The Bad Ones coming out this Friday.

Corbyn Besson: This album was sort of our personal journal album that we wrote over the last three years of touring. Then when COVID hit, we went through ups and downs in different parts of life. I think that’s where the album’s name came from: the good times and the bad ones.

Jack Avery: There were a lot of ups and downs for everybody over the last few years. Each song, I think, holds a specific and special emotion. All the different parts of that…we fell in and out of love and we fell in and out of our careers. And so for us, this was like our journal that we turned into an album.

“Before we were in a band, we were friends first, so I think that’s always stuck throughout the whole processes…we’re all good friends.”

Mark Benjamin: One of the songs I really liked was “Lotus Inn.” It’s a really cool song. How did that song come about?

Jonah Marais: That song came about at the end of our European tour. Last year, we did a show in London and right before we went on the stage, Daniel Seavey came up to me and whispered the melody of the song in my ear and it stuck in my head for that show. It just kept repeating and repeating. It was all I could think about, so we just kept talking about it. Then when we were in Newark airport on a layover, we wrote the whole thing waiting at our gate.

It was kind of based off of the Percy Jackson series. I don’t know if you are familiar, but they stay at this place called the Lotus hotel and casino where time doesn’t really exist.

They eat these lotus flowers that makes them all happy and excited and they basically discover that people can get lost there for their whole life. They don’t realize that time is passing and then come out like five days after that, but they only thought it was a few hours. So, it was just sort of this concept that we wanted to write about. We liked that kind of craziness of a place where time doesn’t exist and wanted to write a song that fits into that space.

Mark Benjamin: Does it help being part of a group where you guys are physically together to brainstorm ideas? Is that helpful for the creation process?

Jonah Marais: Yeah, I think with everything it’s helpful having four band mates. It’s nice obviously with the writing, but it’s also nice just having company on the road. It’s nice to have people that are literally experiencing the same thing as you, so you can talk to them about it. Before we were in a band, we were friends first, so I think that’s always stuck throughout the whole processes…we’re all good friends.

I definitely think it has an impact on the music and even further than musical memories, we have so many random memories from traveling overseas and playing shows. Lots of little inside jokes and memories that only we know about that are also really fun.

Mark Benjamin: I want to also ask about the Smashing Pumpkins “1979” sample in “Slow Down.” How did that song come about and are any of you guys fans of theirs?

Jonah Marais: Yeah. I love them. I think my parents knew exactly who they were when I told them about it. The sample came about in the studio through Jaycen Joshua we were working with – he’s actually mixed and mastered the full album.

We were in the studio thinking about where should we start another track? And he pulls up that loop and he’s like, ‘you guys should try writing to this.’ At the time, I had heard the loop and recognized it. I couldn’t put a name to it or where I had heard it from, but the riff is pretty iconic. He told us, ‘don’t listen to the actual song because it’ll change the way you write your new song.’ And so we kinda just took a stab at it.

It was funny comparing our version to The Smashing Pumpkins’ version because it’s the same loop, but two entirely different songs. When we got it to a place where we were happy with it, we sent it over to Billy Corgan and The Pumpkins. He was gracious enough to clear the sample for us to use and he really liked the song. That was a really cool stamp of approval. We’re very grateful that we got the chance to use that sample because it really is magical.

Mark Benjamin: That’s awesome. You guys work with so many talented people. I was reading how you’ve collaborated with Ed Sheeran on some songs.

Zach Herron: Yeah, and to add to that, Travis Barker. He is playing the drums on many of the songs on the album. So, yeah a couple notable names on there, which has been really cool for us.

Mark Benjamin: What are you guys most looking forward to? Do you have any live show plans? Does it feel weird releasing an album during a pandemic?

Jonah Marais: Oh, man. We’re just waiting for management to tell us if we can tour. Totally, it feels weird releasing an album this way.

It’s definitely new for us, but we’ve just been making the most of it and doing lots of interviews, lots of meet and greets with fans over Zoom. We’ve done a bunch of pre-taped performances, too. I think the day that the album comes out we’re going to be on Good Morning America. There are ways to be in the public eye, but it’s not the same as going on tour.

Mark Benjamin: What is it like to be in a rock band today when there are so many solo artists?

Jonah Marais: It’s way more fun. After touring for three years with these guys, I can totally see how being a solo artist touring would get lonely. You’ve also got everybody around you that’s solely focused on you and giving you attention. I feel like I would just feel very weird in that environment. If I didn’t have someone alongside me who I could pass something off to if I wasn’t feeling it one day. We get to just goof off and have a great time with each other, which is really easy to relate. We’re all going through the same exact thing.

Mark Benjamin: Who’s the most likely to jump out in the crowd and crowd surf?

Why Don’t We: Probably, Zach. Haha.

Mark Benjamin: RAIN is a fashion magazine, so I’m curious if fashion, or designers influence your personal style?

Zach Herron: I just recently discovered this designer named Val Christopher who does like this super distressed…I wouldn’t even know how to explain it, but it’s modern street. The way everything fits is very unique and really dope.

Being ahead with style is fun for us. I usually go on Rails or Farfetch. I like to go with pieces that are used and unique. It’s cool when nobody has it.

The Good Times and The Bad Ones is out now. Stream below.
Instagram: @whydontwemusic