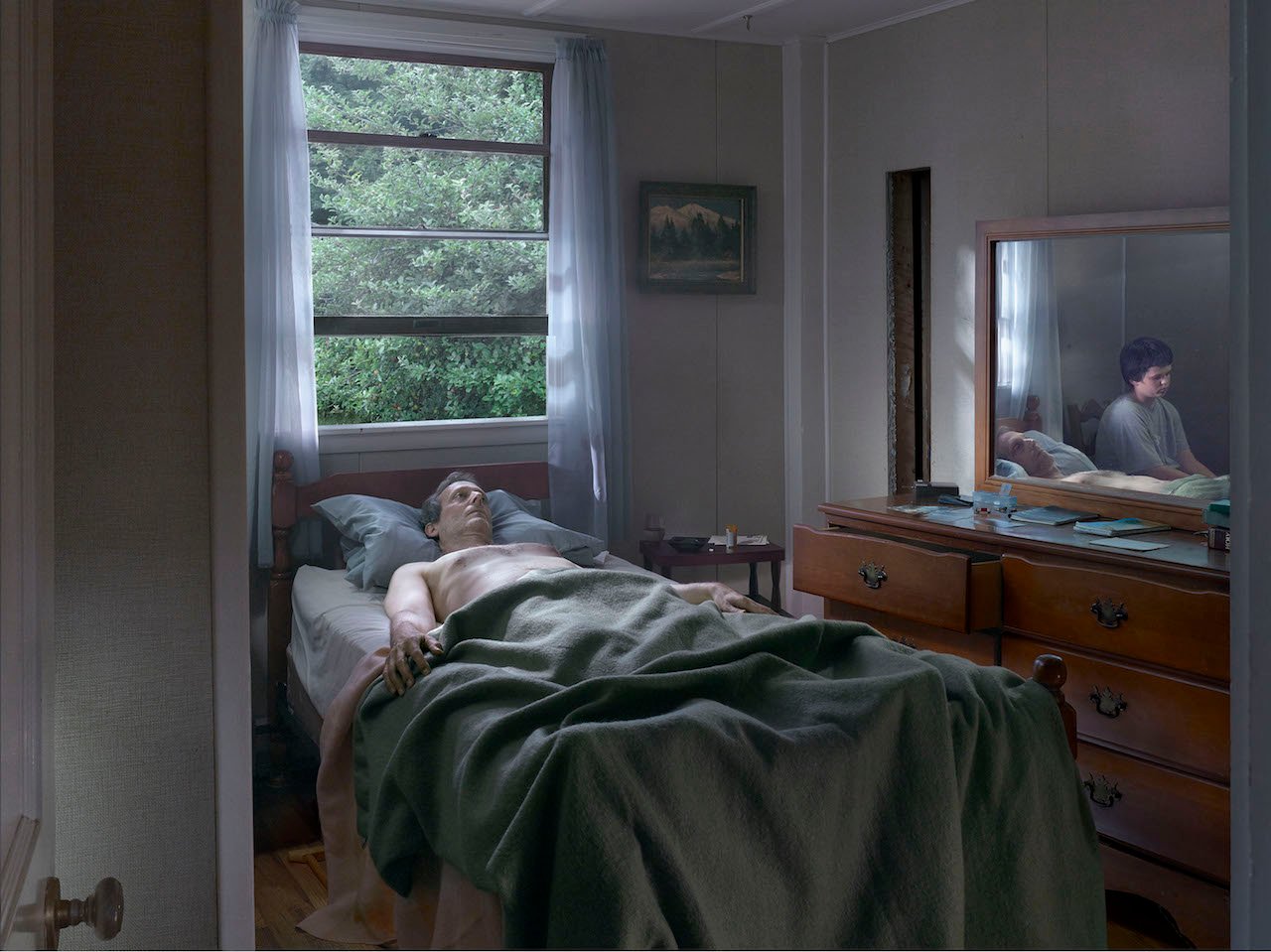 This interview originally appeared in the print edition of RAIN magazine in the spring of 2018.

Gregory Crewdson is one of the most celebrated fine-art photographers in the world. His images explore the underbelly of the American psyche through riveting and unusual moments. Taking small-town America as his subject, Crewdson creates characters, scenes, and always a sense of reflection in a dramatic, tableau style. His latest series, Cathedral of the Pines, was first presented at Gagosian Gallery in New York in 2016 and later shown around the world. We speak with Crewdson about the series, his early life in New York, and the beauty he finds in Americana.

MARK BENJAMIN: I’m sure many people aren’t aware that you used to be in a punk- rock group called The Speedies, which once appeared on The Tonight Show with Jay Leno. Quite fittingly, the hit song you performed was “Let Me Take Your Photo.” How were those years? Did they provide any inspiration regarding how your career later unfolded? Can punk ever die?

GREGORY CREWDSON: Well, first of all, let me correct you. The title of the song is “Let Me Take Your Foto,” with an F. Those were really fun times. We were 16 and 17 years old. I’ve remained close with the other members of The Speedies ever since, and it’s interesting how diverse our paths were after being in the band. I went on to enroll in college, thinking I was going to study to be a psychoanalyst like my father.
I wound up discovering photography in my sophomore year when I enrolled on Photo One, taught by Laurie Simmons. It changed my life. It was like discovering a language I could finally communicate in and fully understand.

MB: Your work looks deep into the American psyche and often is shot in and around small towns. Someone once said that coastal cities such as New York and LA tell the rest of the country how to live. You seem to have had the opposite interest, focusing instead on the heartland and communicating that back to the big cities. What do you find fascinating about where you create your photographs?

GC: My father bought a large piece of land in Becket, [a town] in rural Western Massachusetts, when I was a child. He developed it and built us a cabin, and we went up on weekends and holidays for as long as I can remember. The cabin was in the middle of the woods, but we would travel to the local towns to buy groceries, see movies, go to restaurants, and so forth. I found these local towns—Lee, Pittsfield, Lenox Dale, Lenox—incredibly intriguing and mysterious. They were so different from Park Slope in Brooklyn, where we lived. I have always felt a deep affiliation with these towns. I find the landscape incredibly beautiful and evocative, and the people who live in them captivating.

MB: You cite Diane Arbus, Edward Hopper, and your father—who as you say, was a psychoanalyst—as pervasive influences. In what ways do they continue to inspire you?

GC: My father, though he is no longer here, was and is an incredibly important figure in my life, and was in my childhood family. He was a psychoanalyst, but he was also a pianist. Part of the reason we had a connection to Western Massachusetts was Tanglewood, the music festival. He loved going there. We saw many concerts growing up. Incidentally, my mother was a dancer, so Jacob’s Pillow, which is also in Western Mass., held a connection for her. She studied and danced there.

[In 1973] my father took me to the Diane Arbus retrospective at MoMA—I was
10 years old. I appreciated, for the first time, the power that photographs could have. The experience of going there had huge impact on me, even though I didn’t truly discover photography until I was an undergraduate in college.

MB: In the 2012 documentary “Gregory Crewdson: Brief Encounters,” it’s apparent that the sets created for your photographs are incredibly complex and perfected before you press the shutter. You’ve closed off streets, flipped a school bus, and burned a house down. Can you give an example of how elaborate this creative process can be? Where are most of your photographs taken? How do you scout a location?

GC: For me, the pictures begin with the locations. I drive around in my car, endlessly looking for places where I feel there could be a picture. I visit and revisit these places over and over, sometimes for years, before a picture comes into my head. But once the place is set, and the picture is in my head, then we do whatever we need to realize that story and vision. Sometimes it takes rain machines, shutting down streets, or even creating snow. But I try to stay true to whatever the initial idea for the picture is.

MB: Can you tell us more about your latest body of work, Cathedral of the Pines?

GC: Cathedral of the Pines comes from the name of a trail where I go cross-country skiing. It’s in Becket, which I obviously have a lot of personal connections with. [The area] is made up of forests and lakes. So I like to go back there. In the summer, I hike on the Appalachian Trail—the section that runs through Becket. The inspiration for the entire series of pictures came out of time spent on those trails and the feeling of isolation and connection I feel in nature. I shot the whole series on location in Becket, in interiors and landscapes.

MB: One of many things I find interesting about your photographs is how open-ended the scenes can be. The viewer is often left to piece together what has happened or is happening, perhaps even imagining conversations, character histories, and entire cultural belief systems all in one image. Are we really just filling in the image with our own upbringings and understandings of American cultural archetypes?

GC: The pictures are open-ended and ambiguous by design—but also because they remain mysterious even to myself. I do not know what happens before or after the particular picture I make. The narrative exists only in the single moment.

MB: How important is casting for you? Where do you find your characters? Have you ever had to stop someone in the street?

GC: I have worked on casting for many years with my partner, Juliane. We find the subjects for the pictures from a number of places. We do traditional casting sessions, but also sometimes find people on the street, so to speak, in the neighborhoods we’re shooting in. That was the case many times while making [my earlier series] Beneath the Roses and Twilight.

Cathedral of the Pines was slightly different from previous bodies of work.
I made the decision to use mostly family, friends, and acquaintances as subjects. That was very unusual for me. Juliane is in a few, as is her daughter and son. My daughter is in a picture as well.

MB: An element that appears often in your photographs is the bedroom, more specifically the bed. Some of your characters are pictured sitting on the edge of a bed, lost in thought or feeling something like shame or introspection. What is the connection between the personal space of a bedroom, dreams, and the psyche you’re looking to connect with?

GC: I think I’m fascinated with the bedroom because it’s tied into everyday life—not only in terms of sleep, but also sexuality. I’m interested in the intersection of those things. The bed itself is also interesting to me as a formal physical object. It’s like a platform or a stage.

MB: Do you ever hit a writer’s block of sorts? How do you take a break, relax, and refocus?

GC: I don’t typically get writer’s block. I have a very slow creative process in general, though. It is normal for me to take years
to produce a body of work. There is a long germination period, where I gather ideas and inspiration. It could seem like I’m not making work to someone on the outside, but the time leading up to producing work is very necessary for me.

MB: Are there any photographs you wish you had taken? Any you might revisit?

GC: I would never revisit a picture I’ve already made. But there are pictures I see throughout my day that I would like to make. Seeing people through windows of trains or framed in doorways, for example.

MB: You mention in “Gregory Crewdson: Brief Encounters” that Beneath the Roses was conceptualized at first as a movie, but instead came to life as the series. Would you ever be interested in creating a film again?

GC: Well, in fact, I am planning to make a feature film this year. Juliane and I wrote the screenplay together. It’s called Reflective Light. Stay tuned for more.

An interview with ionnalee behind closed doors

Musician SSION, ‘as big as I can dream’