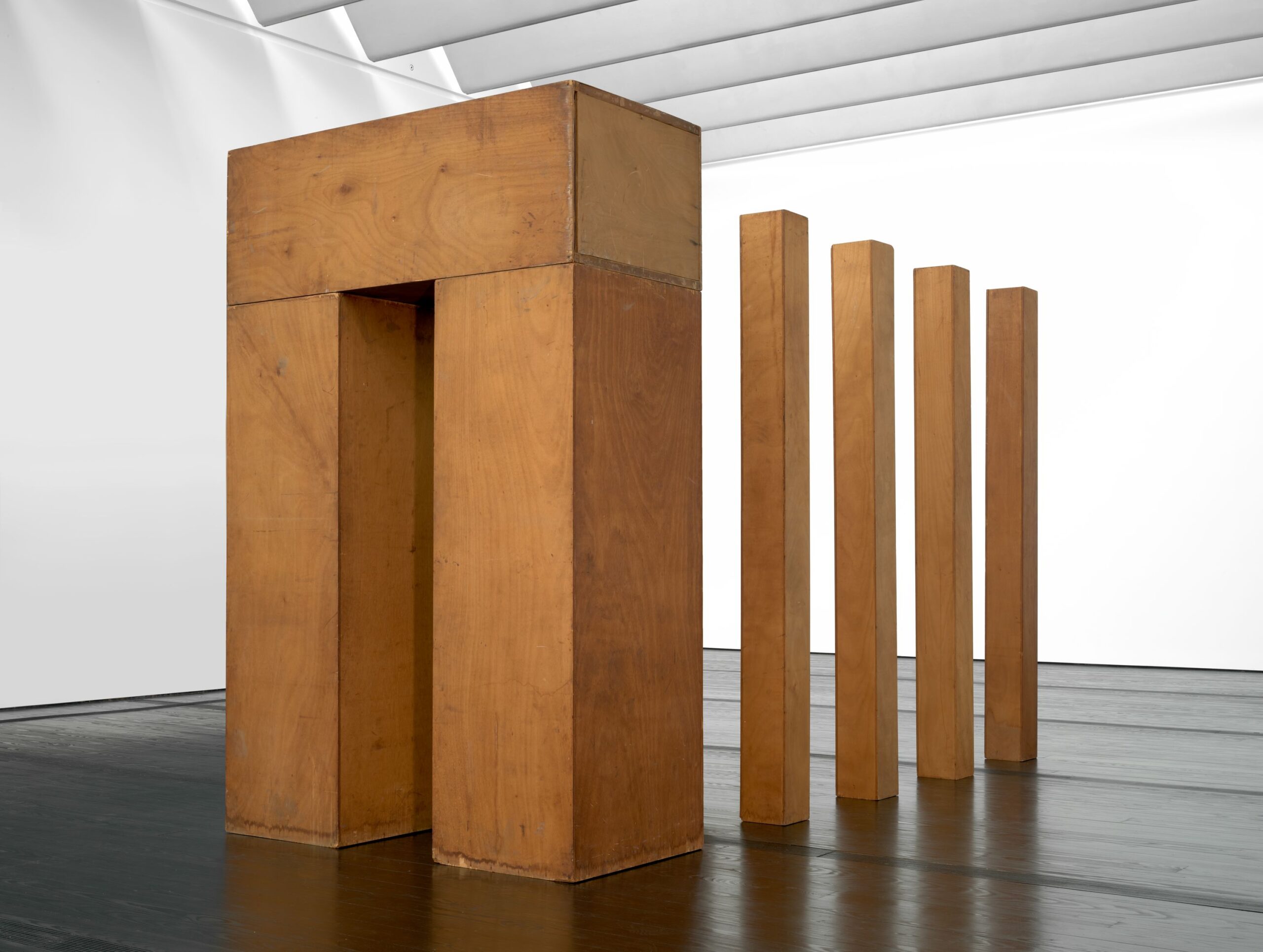 The Menil Collection announces the opening of Walter De Maria: Boxes for Meaningless Work, the first museum exhibition survey in the United States of the more than fifty-year-long career of American artist Walter De Maria (1935–2013).

On view through April 23, 2023, the show presents the artist’s remarkable exploration of space, time, and spirituality through works from the museum’s permanent collection, most of which have been recentlyed and never before publicly displayed.

De Maria actively participated in New York City’s avant-garde music and performance circles in the early 1960s. The artist’s radically simple works from this time, with their modest materials and construction, embody the up-and-coming ideas that led to the development of the Minimalism, Conceptualism, Earth Art, and participatory art movements that shaped De Maria’s career in the years that followed.

The Menil Collection has a long history with Walter De Maria. John and Dominique de Menil began acquiring his work in the early 1970s, De Maria’s first solo museum exhibition in the United States was held at the Menil in 2011, and more recently, the museum has acquired significant groups of his work. The Menil is committed to deep and sustained relationships with artists, and the upcoming exhibition celebrates this mission.

The first gallery showcases a group of plywood constructions and paintings that inspired the title of this exhibition, which was taken from De Maria’s writings from 1960. The artist declared that he wanted to make “meaningless work” about arbitrary actions and playful gestures that lacked any productive outcome.

In many of the presented works, inscribed directions invite the viewer to undertake “meaningless” tasks, often involving the movement of balls and activation of boxes. “Transfer things from one box to the next, back and forth, back and forth, etc.,” reads one. “Walk around the box,” instructs another.

Walter De Maria is perhaps best-known for his monumental permanent installations of the 1960s and 1970s: The Lightning Field, The New York Earth Room, and The Broken Kilometer, among his other contributions to Land Art. Behind these achievements stand the droll, quizzical, often fragile works he produced in the early 1960s with endless and seemingly impromptu inventiveness. We are proud to introduce the public to this deeply underknown and revelatory aspect of De Maria’s practice through the presentation of important examples of work he made throughout his career.

Ball Drop, 1961/1964, a tall plywood box with two square openings, was first displayed at a New York City gallery in 1963. Visitors could release a ball through the top hole, creating a startling ‘crack’ when it hit the bottom surface. Another significant work, The Arch, 1964, presents a row of tall wood columns that create an archway directly relating to the scale of a human figure. Like much of De Maria’s work, the sculpture establishes a profound physical connection to the body and draws attention to the relationship between art and experience.

The museum’s presentation will also include a large group of conceptual drawings, photography, and sculpture related to the development of the artist’s innovative land art projects of the 1970s, and examples of his sound and film work that further engage the body and the senses. Ocean Bed, 1969, has been reconstructed for display in this exhibition. Audience members are invited to recline on a pink mattress while listening to ambient sounds of the sea in this meditative and participatory work.

The show concludes with stainless steel sculptures, such as Channel Series: Triangle, Circle, Square, 1972, a group of the artist’s “invisible drawings,” and two monumental paintings from The Statement Series. Red Painting / NO WAR NO and Blue Painting / YES PEACE YES, both 2011, from the latter group, were made during the last decade of De Maria’s life and specifically for the Menil’s 2011 showWalter De Maria: Trilogies.

Despite the deceptive simplicity, many of Walter De Maria’s works prompt multiple inquiries about what constitutes art, a fundamental question that the artist asks throughout this show through his investigation of the art object, and the idea of experience and action. Because of the work’s age and condition, there is limited potential for audience interaction and as a result, we wanted to highlight in this show how material treatment and conservation proceeded hand-in-hand with our research about the history, meanings, and options for the installation of each work. This deeply satisfying and adventurous collaboration shaped the exhibition.

Born in Albany, California, Walter De Maria attended the University of California at Berkeley, where he studied history and art. He lived and worked in New York beginning in the 1960s, when he turned to sculpture, participated in happenings, and experimented with other media, including film and music. He was an early member of the Velvet Underground, formed by Lou Reed and John Cale. De Maria’s first solo museum exhibition in the United States was Walter De Maria: Trilogies, held at the Menil Collection in 2011. His work has been the subject of seven major solo museum exhibitions in Europe and he is perhaps best known for The Lightning Field, 1977, a geometrically precise arrangement of 400 steel poles, averaging nearly 20 feet in height, located in a remote desert of New Mexico in the collection of Dia Art Foundation.

About The Menil Collection

Philanthropists and art patrons John and Dominique de Menil established the Menil Foundation in 1954 to cultivate greater public understanding and appreciation of art, architecture, culture, religion, and philosophy. In 1987, the Menil Collection’s main museum building opened to the public. Today, the Menil Collection consists of a group of five art buildings and green spaces located within a residential neighborhood in central Houston. The Menil remains committed to its founders’ belief that art is essential to human experience and fosters direct personal encounters with works of art. The museum welcomes all visitors free of charge to its buildings and surrounding green spaces.