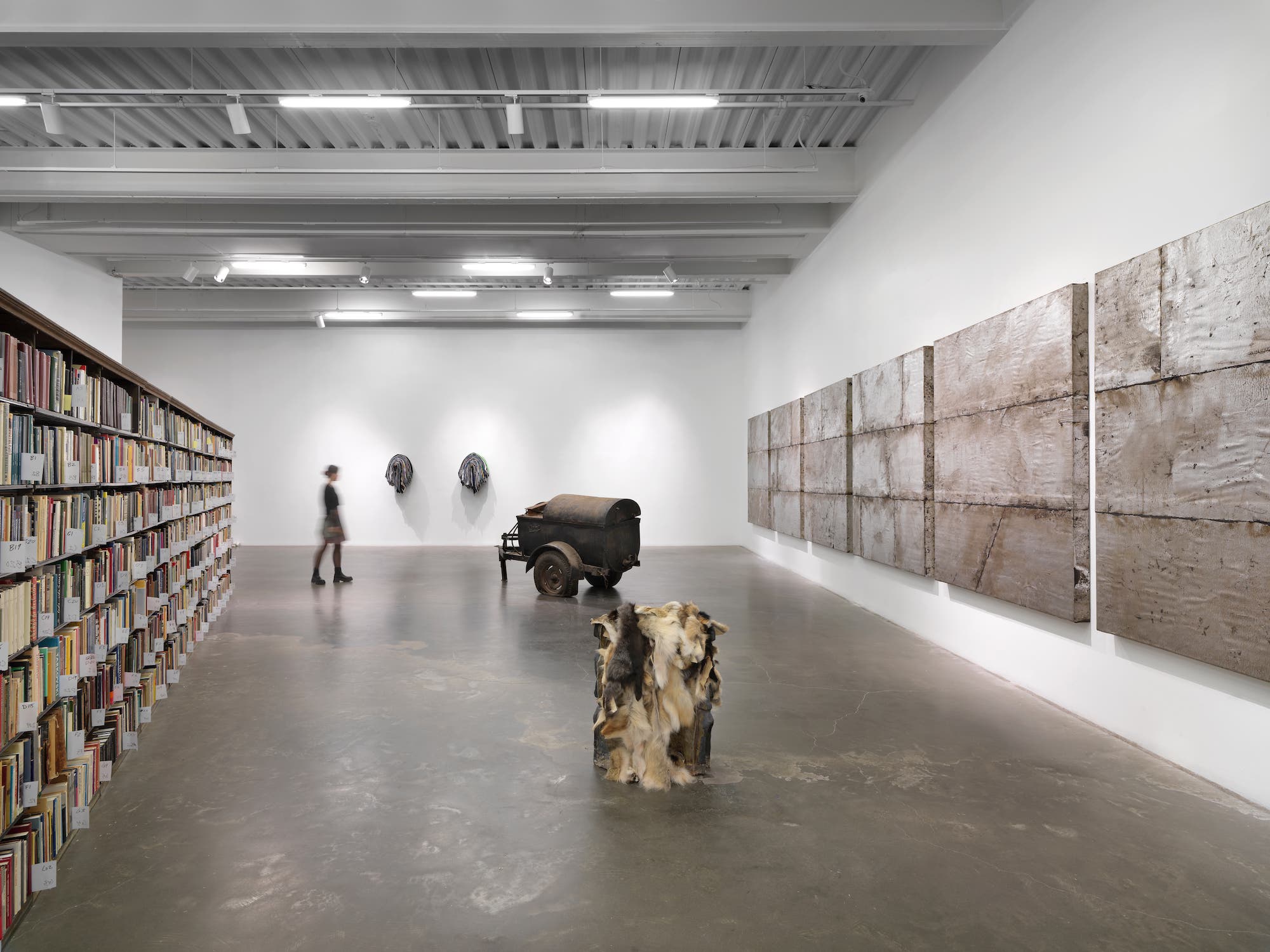 Artist Theaster Gates celebrates the first American museum survey at the New Museum in New York, “Theaster Gates: Young Lords and Their Traces.” The show encompasses the full range of the artist’s practice across a variety of media, creating communal spaces for preservation, remembrance, and exchange. This landmark exhibition will accompany a presentation of newly commissioned works by Vivian Caccuri and Miles Greenberg, exploring the relationship between bodies and sound waves.

This exhibition will encapsulate the full range of Theaster Gates’s artistic activities across three floors of the museum, featuring artworks produced over the past twenty years and site-specific environments created especially for this presentation. Gates has titled the exhibition “Young Lords and Their Traces” in honor of the radical thinkers who have shaped his home city of Chicago and America. For Gates, collective forms of knowledge are built across objects, images, sounds, movements, and, most importantly, through the relationships between people. This survey exhibition will comprise a choreography of works, including paintings, sculptures, videos, performances, and archival collections working together to memorialize heroic figures and more humble, everyday icons. Gates’s elevation of these quieter sources of knowledge and his assertion that collecting and archiving are forms not only of preservation but also of devotion and remembrance have made his work reverberate both locally and internationally.

Gates emerged in the early 2000s with a sculptural practice characterized by its use of salvaged materials and deeply researched interdisciplinary histories—a mode of working that he maintains today. The elegiac formalism of Gates’s large-scale tar paintings, experimental clay vessels, and immersive architectural installations can be linked to personal and collective narratives of labor and spirituality. Alongside his early sculptural production, Gates has undertaken an ambitious project to revitalize his neighborhood on the South Side of Chicago by transforming unused buildings into experimental spaces to explore Black culture. In recent years, Gates has linked these activities by rescuing various historical collections of images and objects in Chicago and creating architectural spaces and sculptural structures for their preservation and dissemination to wider audiences.

Young Lords and Their Traces

Through “Young Lords and Their Traces,” Gates will reimagine the function of a museum as a space for personal histories and spiritual convocations. As part of the expansive exhibition, one entire floor of the New Museum will be transformed into a kind of personal museum, gathering artworks, artifacts, and mementos connected to influential figures in Gates’s life and career who have passed away in recent years: curator Okwui Enwezor, writer bell hooks, and Gates’s own father, among others. While tinged with a sense of loss, Gates’s recent work creates a network of intellectual and aesthetic affinities across generations. The result is less a map of personal obsessions than an assembly of voices in which the viewer is invited to participate. Combining an intimate, poetic sensibility and a sense of civic commitment, Gates’s work reimagines art as a form of social sculpture that can open up new modes of collectivity and knowledge production, even in the most surprising contemporary settings.

Vivian Caccuri and Miles Greenberg: The Shadow of Spring

Artists Vivian Caccuri and Miles Greenberg, based respectively in Rio de Janeiro and New York, will collaborate for the first time on an exhibition designed for the New Museum’s Lobby Gallery. “The Shadow of Spring” investigates the phenomenon of vibration and its ability to trigger collective transformative experiences. Featuring newly commissioned sculptures, installations, embroidery pieces, and sound works developed separately and in collaboration, this exhibition will form an encompassing environment created to provoke alternative ways to experience the sonic dimension.

Greenberg, known for his emotive durational performances, will present two newly commissioned sculptures. Each piece was developed from 3D scans of his own body taken during Fountain I, a seven-hour-long performance from 2022. The abstracted three-dimensional sculptures generated by this process function as fountains pouring water from multiple points, adding to the soundscape of the space. The three sculptures are staggered across the gallery, seemingly floating on the surface of mysterious pools of unknown depth, bordered by volcanic stones.

Installed on opposite sides of the space, Caccuri’s large-scale installations combine sound system and embroidery works, continuing the artist’s investigations of sound and sensory perception through objects, installations, and performances. Her two embroidered works echo the shapes of Greenberg’s sculptures, depicting abstracted scenes in which groups of dancers challenge the conventional limits between individual bodies. The carefully hand-made embroidery works adorn plastic fabric typically used as mosquito netting and stretched within a frame of hi-fi speakers, expanding a body of research previously presented at the Venice Biennial in 2019.

The two sets of thematically related works are further connected by a new sound piece jointly created by Caccuri and Greenberg, enveloping the audience and the entire installation in an experience of spatial reorientation. Inspired by how different rhythms and frequencies can affect group dynamics (as in temples, dance floors, and urban spaces), through “The Shadow of Spring,” Caccuri and Greenberg together investigate the multifaceted relationships between bodies and sound waves.

“Vivian Caccuri and Miles Greenberg: The Shadow of Spring”

Lead support is provided by Christina Hribar. Support for this exhibition is provided by the Toby Devan Lewis Emerging Artists Exhibitions Fund. Artist commissions are generously supported by the Neeson / Edlis Artist Commissions Fund. Additional support is provided by: Morton Neumann Family Foundation and the Consulate General of Canada in New York. We gratefully acknowledge the Producers Council of the New Museum. Special thanks to the Artemis Council of the New Museum.

Vivian Caccuri (b. 1986 in São Paulo, Brazil; lives and works in Rio de Janeiro, Brazil) uses sound as the vehicle to experiment in sensory perception with issues related to history and social conditioning. Through objects, installations, and performances, her work creates situations that disorient everyday experience and, by extension, disrupt meanings and narratives seemingly as ingrained as the cognitive structure itself. Caccuri has developed projects in many cities in Brazil and abroad, including Accra, Detroit, Helsinki, Vienna, Venice,

Kiev, Valparaíso, New Mexico, and South India, among others. Throughout her career she has collaborated with musicians, such as Arto Lindsay (USA/BR), Gilberto Gil (BR), Fausto Fawcett (BR), and Wanlov (Ghana), and recently released her first musical project (Homa). Her sound works and compositions have been broadcast on radio stations such as Resonance FM (London), Kunstradio (Vienna), and Rádio Mirabilis (Rio de Janeiro). At Princeton University, she wrote her first book, “Music is What I Make” (2012), published in Brazil and awarded the Funarte Prize of Critical Production in Music in 2013.

Miles Greenberg (b. 1997 in Montreal, Canada; lives and works in New York, NY, and Reykjavík, Iceland) is a performance artist and sculptor. His work consists of large-scale, sensorially immersive, and often site-specific environments revolving around the physical body in space. These installations are activated with often extreme durational performances that invoke the body as sculptural material. These performances are then captured in real time before the audience to generate later video works and sculptures. Rigorous and ritualistic in its methodology, Greenberg’s universe relies on slowness and the decay of form to heighten the audience’s sensitivities. The work follows self-contained, non-linear systems of logic that are best understood in relation to one another. At age seventeen, Greenberg left formal education, launching himself into four years of independent research on movement and architecture, which spanned a number of residencies in Paris, northern Italy, Beijing, and New York. He has worked under the mentorship of Édouard Lock, Robert Wilson, and Marina Abramović, and has since exhibited extensively internationally.