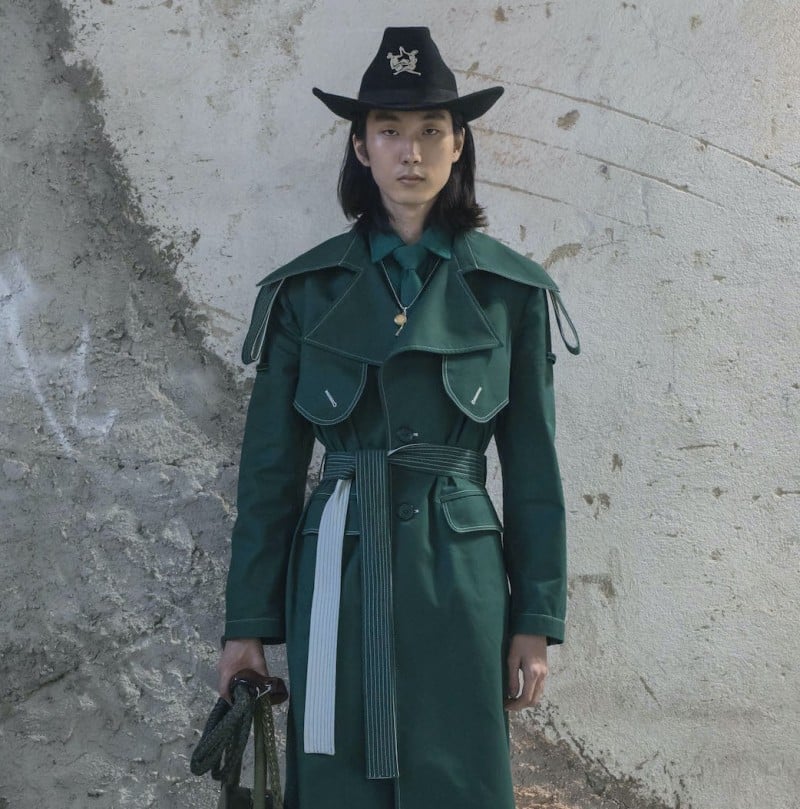 South African label, Thebe Magugu presents the men’s spring/summer 2022 ‘DOUBLETHINK’ collection as part of Pitti Immagine Uomo. Inspired by George Orwell’s novel 1984, the collection is the first men’s solo show for the brand. The collection draws upon the corruption in Africa and “the whistle blowers who challenge it.”

“In many ways, the societal ills the continent wrestles with stem from the insidious actions of its leaders. In South Africa, we have regularised the daily tales of missing millions and economy-controlling families. These stories become dinner-time anecdotes, which minimizes the devastating ramifications that corruption holds – from increased gaps in education and equality to the mismanagement of public goods and service, which often always morphs into violence. Corruption is a global issue, which defeats the ends of justice and deters a country’s sense of safety and trust. However, some strong individuals have said ‘enough!’ – the brave women and men who have come forward as whistleblowers, who have exposed the level of rot from companies and institutions both private and state”.

“Whistleblowers are not celebrated or cast as heroic characters. Instead, they are largely treated as insubordinate, pariahs or troublemakers, wearing the scarlet letter W and unable to find employment. I have chosen to shine a light on the plight of whistleblowers in South Africa, in the hope to advocate for a change in legislation, organisational support and a change in social attitude”. This started the collection’s strong western influence, which explores the idea of Black Hat Bandits and White Hat Heros. Silhouettes in the collection explore an evolved masculinity, which merge the classics of mens tailoring with the elaborate detailing of the Great Basin buckaroo, which has obvious roots in the Spanish vaquero. The colour-way includes high-veld yellows, bushy greens and baby blues, which all burn into hots like sour orange and blood red. The colours were pulled from both the previous and the current national flag.

DOUBLETHINK is an Orwellian term, “defined as the act of simultaneously accepting two mutually contradictory beliefs. Corrupt politicians are conscious of the truth, while telling carefully constructed lies – the art of knowing and not knowing.”

In addition to the collection, the brand runs a newspaper called FACULTY PRESS in collaboration with leading South African newspaper THE DAILY MAVERICK. It explore the cost of corruption on the country and continent by featuring journalistic voices such as Ferial Haffajee, Branco Brkic and Sibusiso Ngalwa, with a paper by fashion theorist Erica De Greef.

Explore the full collection below, courtesy of Thebe Magugu.