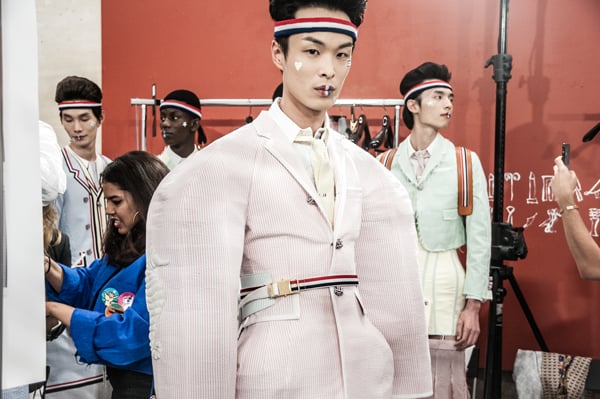 Thom Browne presents the Spring/Summer 2020 men’s collection at the École des Beaux-Arts in Paris. Set beneath a blazing sun, models stand patiently in what amounts to trompe l’oeil garment bags graphically designed to foreshadow seersucker looks underneath. Only a short poem is provided to clue us into what the ever-imaginative Mr. Browne has in store for the Spring/Summer 2020 collection.

A short, perhaps menacing, tale of an eccentric host, Monsieur Brun, presumed to be Mr. Browne, invites guests into his secret garden where he allows guests just once a year. Principal dancer James Whiteside from the American Ballet Theatre in New York proceeds to give a stunning choreographed performance in a seersucker tutu as the show begins. A garden party indeed. After the first few looks a clear dichotomy emerges: 18th Century haute couture – by way of crinoline, fabrics, and imaginative new shapes – and American sports. Perhaps the most telling singular moment of their combination was a latticed football helmet that made several appearances throughout the collection.

This last point was lost on many in the fashion community perhaps because American sports are quite distinctive in their cultural positioning within America. The key is the soundtrack Browne played along with the show. There were references to football and basketball anthems one would hear court-side at a game blended with classical music. Much like American artist, Jeff Koons, Thom Browne’s creations have always bordered between the imaginatively absurd and sincere criticism – albeit in subversive, and even sinister, forms at times.

There was his first show in Paris – a nod to the space race that gave prep a touch of lipstick and gave suits shorts taking menswear to a new frontier. There was the geeks and freaks collection in 2012, there was also Thom’s army with the military collection of 2014, there were the garden gnomes last season, Spring 2019. Browne has a masterful way of taking serious subjects like the conformity of military dress and manipulating it to his liking while taking less serious subjects into the realm of the uncanny, often to the point of discomfort. The effect was not lost on this collection.

The blending of traditional with contemporary and exclusivity with popularity becomes a cultural and political messaging for Spring/Summer 2020. Sports themes blend seamlessly into high fashion ensembles while gender and masculinity are smeared away. When the powerful dancing of Mr. Whiteside in a blazer and tutu becomes the most masculine element of a menswear show you know Mr. Browne has succeeded in his vision. Runway images courtesy of Thom Browne. Exclusive backstage images: Benoit Auguste for RAIN Magazine.