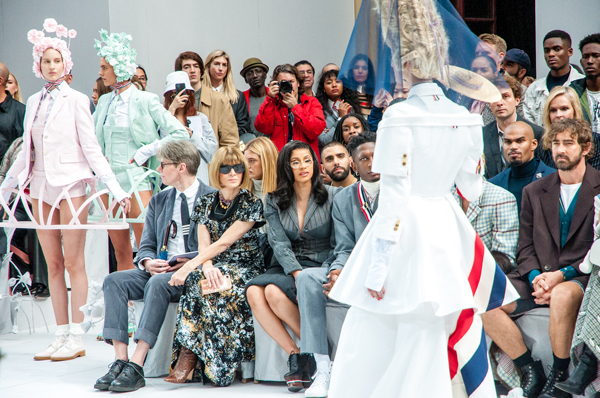 Thom Browne continues the journey from the spring/summer men’s collection in Paris. Trompe l’oeil suits similarly opened the women’s collection followed by a Victorian assemblage of couture references all set to a mix of classical and rock music. Mixing American fair and Victorian references produced an interesting effect that didn’t seem all that unusual in the end.

Browne’s own language of preppy symbolism referencing his previous collections kept much of the same ‘skin’ though the ‘structures’ were upended dramatically to follow couture shapes. As we’ve noted in previous reviews there remains a satirical, even sardonic thread to the collections, perhaps even a sobering moment of reflection for the viewer.

Mr. Browne seems well aware of the imperial attempt of having his American design vernacular seize the language of couture. His valiant attempt is emphatically celebrating the absurdist and awkward marriage with wit and charm. With such lofty ambitions only an aggressive and unabashed American heavy metal track would fit the bill. Bravo Mr. Browne.

Carlos Vara has an emotional debut, ‘Have you ever seen a boy break down?’