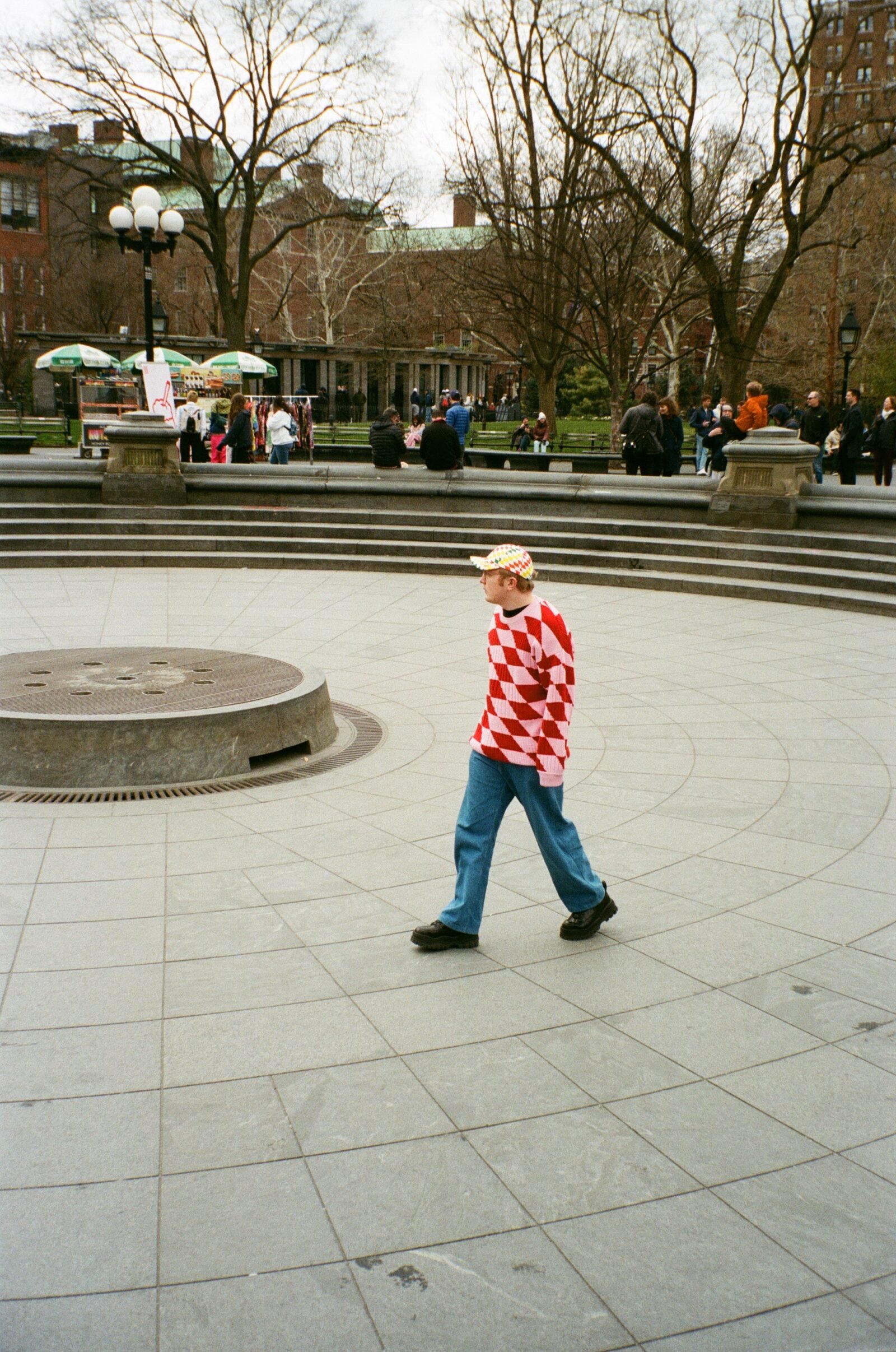 Umru is a multi-hyphenate producer and the de facto glitchcore / hyperpop godfather for many young artists. He recently dropped his second EP, ‘comfort noise.’ The seven track record has some interesting features. Artists such as Rebecca Black, Tommy Cash, 645AR, Fraxiom, Petal Supply, emotegi, Tony Velour and more give the EP an impressive range of sounds.

Umru was first discovered by the founder of PC Music, A.G. Cook. Umru has gone on to produce for artists like Charli XCX and ericdoa. Rain caught up with umru to find out what ‘comfort noise’ and a coming remix project/EP might have in store.

Mark Benjamin: How did you get into music?

Umru: I started making music in high school. Probably in 2015 or 2016, I started releasing stuff online on SoundCloud. I wasn’t trying to get attention or anything. I was just putting stuff up and hanging out with producers online, like in group chats.

What did you want to do? How did you think life was going to turn out?

I don’t know. I was equally interested in doing film or graphic design.

Yeah, I did website design for people but I was never super invested. I ended up going to City College for music, but even when I was starting it wasn’t, ‘oh, this is definitely what I’m gonna do.’

What kind of music did you grow up listening to?

I was very online. I loved mashup culture; a lot of the music I knew was from compilations and mashups. A lot of the classic songs everyone knew, as a kid, I hadn’t heard until they were in some DJ set. Before I was putting music out, I was making daft punk mashups and listening to skrillex and deadmau5.

Who was the first artist you produced for?

They’re huge now, Sophie Meiers. That was probably the first vocalist that I worked with on a song called “Ribbons.” It was very experimental. There’s probably other random people, too. I would send beats to people sometimes, but that’s the first vocalist.

It feels like you’re ubiquitous because looking around glitchcore / hyperpop it always comes back to umru.

I would love to do more. It’s limited by me. Generally, I have not been producing enough output. I’m not unhappy about it, but now that ‘comfort noise’ is out, I want to focus on that. It took two years to put the EP together. Now I’m hoping to produce more pop music and take it to a broader audience.

Tell me about ‘comfort noise.‘

It’s two years of assembling music. Only one of the songs on my EP was made specifically to be on my EP. All the songs were me working with someone and not having a goal. Later, I thought can I use this song for a purpose?

The Tommy Cash song we made in the same session when we made ‘SDUBID.’ ‘heart 2,’ with Petal Supply, was the only song where I mentioned the EP and asked if she wanted to be on it.

I love the banger with Rebecca Black.

Yeah, that’s the song. We asked Rebecca to get on it afterwards. It’s really interesting what happened to Rebecca Black. There was a whole period where she was gone from everywhere.

She had this comeback moment, a few years ago, where she posted how insane it was to be a kid and have the most hated song ever, ‘Friday.’

During COVID she was working on hyperpop songs, working with people like Dorian Electra. There’s this community online that somehow got Rebecca’s attention. It’s mostly people who love pop music from the 2010s unironically. DJs will play sets with ‘Friday’ and they don’t think it’s funny. They just like it. Rebecca was interested in that and got in touch with me and Laura Les (of 100 gecs).

We were making beats for Rebecca in like 2019. One of our friends had told her, ‘did you know there are these musicians that like your song?’ Nothing came of it back then. It’s been a long time coming to have a song with Rebecca Black.

I also love people like Tommy Cash. He blew up for doing something funny. He has proven to just be really good at what he does. It wasn’t a gimmick, you know.

There’s also 645AR on the same song as Tommy Cash. He blew up for doing something crazy that people thought was funny. He knows it’s entertaining, but doesn’t think of it as a joke and has really perfected it

It’s funny even when 645AR is doing a crazy high pitched voice, he does the same take on a verse 50 times and is like, ‘that’s the one.’

LMAO. I love that. I love hyperpop.

There’s so much stuff that got grouped into it. In some ways it’s cool, because I discovered a lot of new artists mostly through them getting grouped into the same world as me. High pitched, pop catchy music, but it’s misleading. Look at the hyperpop Spotify playlist.

It’s been talked about to death, but it was crazy for these random 16 year old kids who were struggling and needed money for music to have to compete directly with people like Charli XCX. Many artists were negatively impacted when some other huge artists bumped them down the playlist. They end up getting fewer plays that month. It did matter to people that for the first time they made money from music, it got randomly taken away.

The classic line about hyperpop is like, ‘oh, it’s influenced by PC music and it’s influenced by night core or whatever.’ That wasn’t true for half of the people that were getting added to the hyperpop playlist and being told who their influences were. Just because they sounded similar enough to something else.

To the untrained ear it all sounds the same. But that’s like grouping classical music altogether. It doesn’t make sense.

The playlist’s been around long enough that it’s not constantly discussed anymore. A select few people have basically hit the mainstream through stuff like that but the vast majority never really benefited. Yeah, some people have hit mainstream. People like glaive are played on the Fortnite radio.

He was kind of always made to be a popstar. His music was never that left field. It’s pretty..

Consumable and marketable, I guess.

People from that world are breaking out, but it’s only a select few of them. The ones that are probably the most marketable.

Some people like quinn seem to keep it underground. I saw that they had a feature in The New York Times which was really funny to me that the NYT pays attention to this music. Every week I’m discovering a new artist. This week it’s Luvox.

I actually haven’t heard anything from Luvox in a while. That was one of the earlier digicore people that I found out about. Super talented.

How does a young person in music make money? Is it sustainable when Spotify and the labels have this industry so squeezed?

Younger artists that have never played shows before…I don’t know. Some people have had breakout hits like Alice Gas. Alice has the one song on TikTok and made money because she owned a hundred percent of it. No label, no collaborators even.

That’s powerful when that happens. Like wow an artist can 100% own their own work. I guess my question is, is it enough money for these artists to invest in themselves to go on and continue to make music?

They don’t have labels. I don’t think it’s super sustainable and it’s not designed that way. Streams on their own are not sustainable. Even if you do get some level of a fan base, it’s hard to keep making money from it.

I have always been super lucky to be able to make money as a DJ. Before COVID, I did a lot of smaller shows where I would DJ every few weeks. Now, I primarily make money from sample packs for Splice.

Do you think there’s anything the industry could change?

Some artists have dedicated fan bases will pay for Patreon. Six Impala – underscores is a member of it – they’re 5 producers that started out making dubstep. They have a hardcore community and they do Patreon which helps them out.

It’s rare though. That’s the thing. People blow up from streaming, but usually don’t end up getting that level of a dedicated fan base. It’s hard.

I would love to. I love when I get to curate stuff; those shows are really fun. I’m sure I’ll do a round at some point. We’re doing a remix project of ‘comfort noise’ soon. I’m trying to get it as stacked as possible. The project itself already has so many people, but that’s the fun of it. Curation has ended up being just as much part of my production as making sounds, and I love to try bringing together people and sounds that might not haved worked together otherwise.