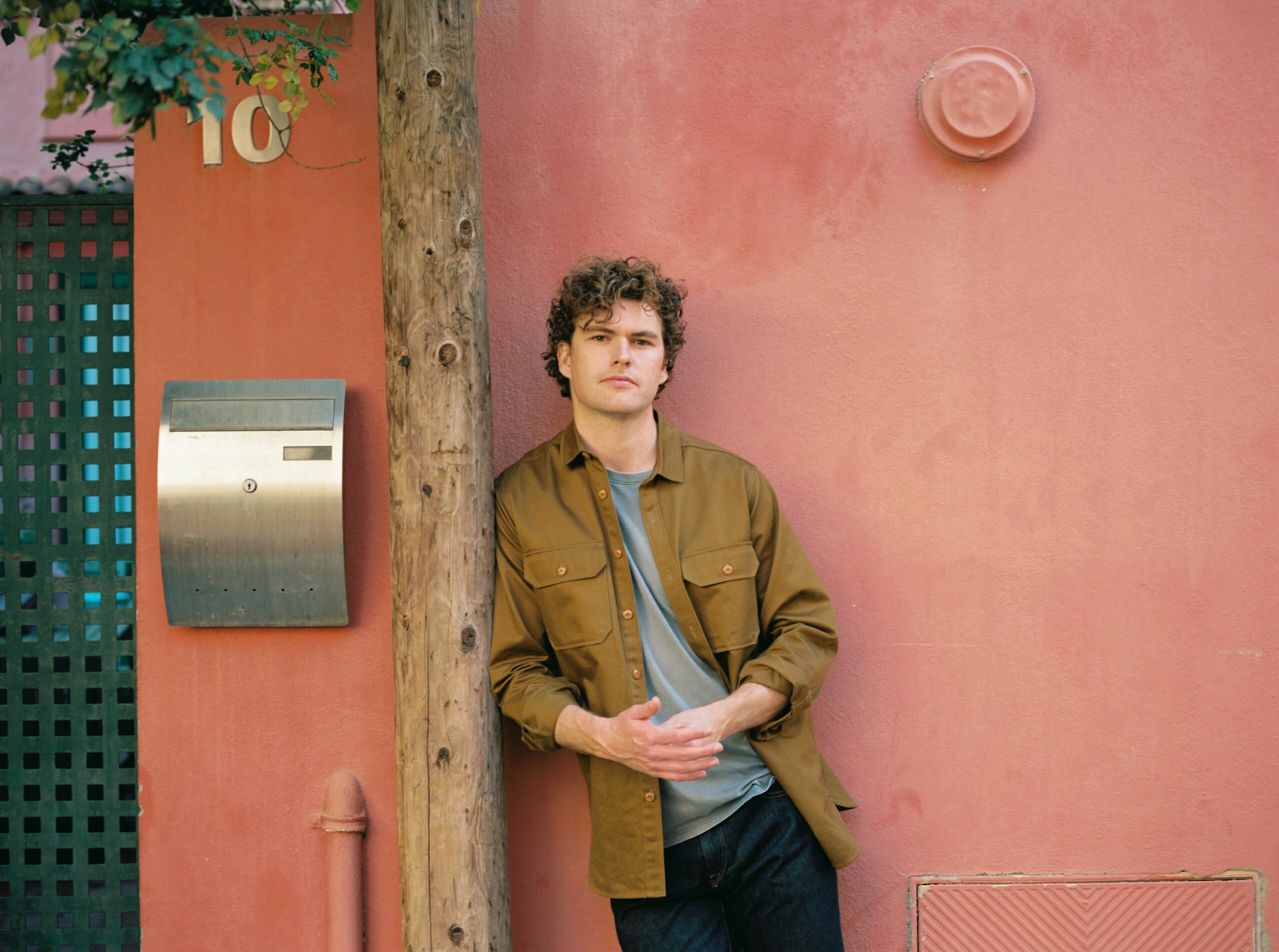 Multi-platinum singer-songwriter Vance Joy recently released his first album in four years. His third studio album, In Our Own Sweet Time, is an emotional and heartfelt journey to human connection. Written and recorded during lockdowns, Vance Joy describes the new album as being “fueled by old friends, new memories and finding love in a not-so-hopeless place.” For Joy, that became the city of Barcelona. In fact, the song “Catalonia” taken from the album is an ode to the region he came to know so well.

“I’m always drawn to the idea of timelessness or that shared moment that takes you out of the chaos outside,” Joy explains on his approach to writing the album.

“If the world is crazy, you can retreat somewhere. It’s always hard to think of the right title but I think In Our Own Sweet Time sums up the album perfectly.” Rain caught up with the critically acclaimed artist to talk about the travels, thoughts, and moments that set the stage for Joy’s In Our Own Sweet Time.

One of the songs I was blown away by on the new album is ‘Catalonia.’ You lived in Barcelona during the pandemic, is that right?

Yeah, it is a cool place. I was living there around August of 2020. Prior to that, I was in Melbourne, Australia for the first five or six months of the COVID lockdowns. Eventually, I picked up and moved to Barcelona in August to live with my girlfriend. I went back again in 2021 for another six months and now I’ve been there most of this year. I’ve probably spent over a year there in total now. It’s kind of home base at the moment.

How did living in such a historic, beautiful and storied city inspire the song?

For “Catalonia,” I reflected on my impressions of Barcelona. I feel like you move at a different pace there. You have a late dinner; you probably end up going out for beers afterwards. It just has a different approach than what I’m used to in Melbourne. It’s more social, too; there’s a lot of time in the sun, and the summer is quite long and hot. You also hang out on a lot of balconies and terraces at friends’ places.

I always meet a lot of new people in Spain. The culture is so social, like nowhere else I’ve ever been.

I agree. That’s exactly the feeling I get there. It’s the connection. The way it moves; it’s not static. It’s kind of like blending in; you blend in with other people. It’s cool.

I need to play the songs live and so for me I’m trying to bring them back to the essentials of playing a riff on a guitar and singing. It helps me guide the songs and not stray too far.

In New York, I saw you play a few songs from the new album, In Our Own Sweet Time. Are those some of your favorites?

My favorite song from the album is “Don’t Fade.” I was stoked about that song when I wrote it. It felt like a bit of an evolution for me. The way I wrote the verses, to even the way my voice sounds…I like the harmonies, too. It felt like something I hadn’t done before.

There’s also “Missing Piece” and “Every Side Of You.” When I released “Missing Piece”, it was nice the way people reached out to me and let me know they connected with it. That’s why it’s been fun to play live. I’m happy with all the songs on the album really but those, you know, if I had to pick my top three, those are probably my favorites.

How is your songwriting process like? Do you find yourself walking down the street and lyrics just hit you?

That has definitely happened a lot. I’m always humming a melody into my phone on voice memos which kind of happens anywhere I am. I also spend a lot of time listening to the demos of the songs, walking around, wandering, and just taking them in. I get excited about them that way. Then I think, ‘Oh, I’m going to produce it this way or arrange things like that!’

You have to decide if the song is a ukulele song or not.

Oh, yeah! The instrumentation. The ukulele is always in the kit! I played another instrument on this album called a banjolele on one of the songs. There’s also a song called “Wavelength,” which is a bit of a detour on the album. It’s probably the most experimental song.

I did a songwriting session with Dave Longstreth from the band Dirty Projectors for that one. He was playing the guitar in such a different way than I would. I mean he can really shred a guitar. We put that part in and it has such a cool flavor. There are so many different styles on the album and collaborators which is so nice to have.

I find it impressive for an artist like yourself to stick with your bare bones singer-songwriter sound because it’s hard, right. Today, there are so many different influences and sounds going on in popular music.

I appreciate that. It’s a nice thing because when you’re making albums and recording your songs, there’s always pressure to wonder, ‘how does this fit into the landscape and my work?’ I can produce it like this or follow that trend or whatever, but it is always evolving. I need to play the songs live and so for me I’m trying to bring them back to the essentials of playing a riff on a guitar and singing. It helps me guide the songs and not stray too far and lose touch with why people connect with the music.

What music are you listening to right now?

I’m listening to Elliot Smith a bit. I like some Bruce Springsteen songs, too. Oh, I also Shazamed a great remix called “I Go” by Peggy Gou. Fun fact, I like electronic music. Sometimes, I’ll hear a song and get obsessed with it for a little while. It doesn’t happen that often, but when it does, I get stuck on it for a while.

Catch Vance Joy on his North American tour next spring. Tour dates can be found on vancejoy.com.