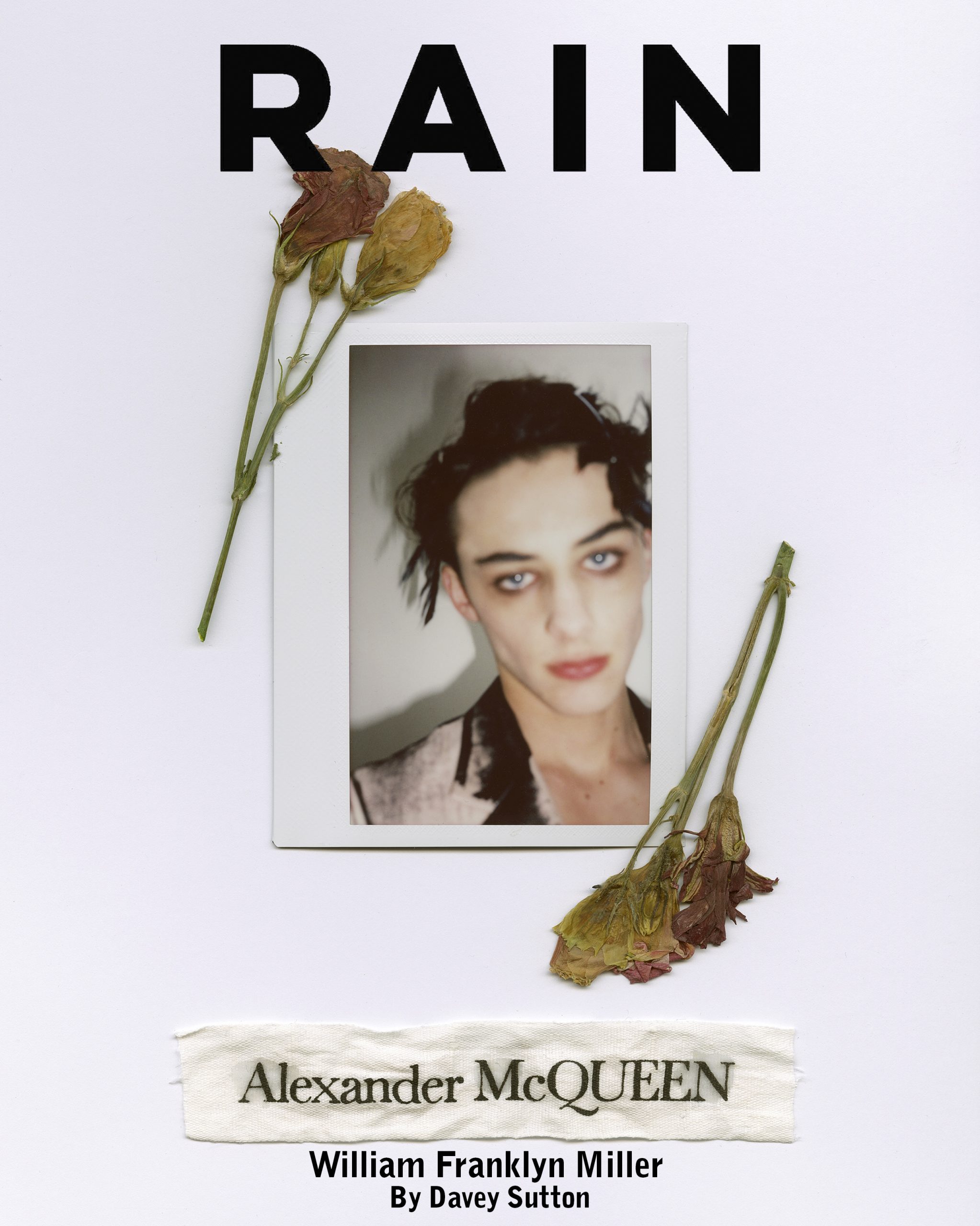 William Franklyn-Miller stars in a new exclusive editorial and digital cover for RAIN photographed and styled by Davey Sutton. The rising model and actor at just 17, has already starred in a hit television series, Medici, and became the face for the Fiorucci collection by Daniel W Fletcher. Based in London, RAIN produced a fashion editorial starring William, Kian, Robert, and Mumin photographed in the men’s Alexander McQueen spring/summer 2021 collection. We catch up with William here on his career, passions, and admiration for Travis Scott in an exclusive interview for RAIN.

Mark Benjamin: You recently starred in the Medici series. Tell me about that experience. Did this area of history interest you prior to joining the cast?

William Franklyn Miller: Working on the Medici TV series was definitely the highlight of my acting career so far. I spent about 5 months filming in Italy which was just an incredible experience. We were so lucky to film in some of the most amazing buildings, which were actually around in the time of the Medici family. To be honest, I didn’t really know much about the Renaissance period prior to working on the series, but it was amazing to learn about the history, the art of the people, and to actually be filming where it all happened. Therefore, I feel lucky to have had the opportunity, and Italy will always be a country I love.

MB: Does working as a model help your on-screen performance and vice versa?

WFM: Yeah, it does help a bit. Photographers have commented that I can express a lot of emotion and feeling in my face, and I suppose that comes from acting. Since I have been modeling since I was very young, I am comfortable in front of the camera and this has helped me not to be nervous when filming. So, they do both help each other.

“I’m really lucky to have the support I do. I go to school and my friends and parents definitely keep me grounded. I’m just Will to them.”

MB: You have gathered quite the following on social media! Did this happen naturally? Were you surprised to see the way your career took off?

WFM: I was scouted modeling when I was five and worked regularly both in the U.K. and Australia. I started posting on instagram with my parents help when I was 12 and one of my photos went viral in Japan and then it just grew from there. I got asked to star in TV shows in Australia, got flown to Palm Springs for the World’s Top Young Models, to shoot for L’Officiel magazine and then was flown to Japan to be on one of their most popular entertainment shows. I’ve been really lucky.

MB: Do you ever feel the urge to shut it all down and move away to a cabin in the woods? How do you stay grounded?

WFM: To be honest, I never feel that way. I’m really lucky to have the support I do. I go to school and my friends and parents definitely keep me grounded. I’m just Will to them.

MB: How was it like starring as the face for the Fiorucci collection by Daniel W Fletcher?

WFM: Daniel Fletcher was such a lovely guy and I was excited to work with him on the Fiorucci campaign. The clothes were just amazing and I’m lucky to have been part of it.

MB: What’s your favorite piece of clothing that you own?

WFM: I’m really into my sneakers. My favorite pair would be my Jordan 1 Lows by Travis Scott, but I have so many pairs my mum is always at me to put them away!

MB: Do you have a dream fashion collaboration?

WFM: I’d really love to work for Louis Vuitton, Off-White, and Celine. Actually, that would be so cool.

MB: One of the most important designers of our times is British designer, Lee Alexander McQueen, whose clothes designed by Sarah Burton you wear in this editorial. As a Briton yourself, does that have any significance for you? I wonder have you seen the Alexander McQueen documentary?

WFM: Actually, I haven’t seen the Alexander McQueen documentary, but I plan on checking it out after my exams are over and I have the time! I love Alexander McQueen. In fact, the clothes I wore at the shoot were incredible and completely different to what I’ve done before.

MB: Outside of modeling and acting do you have passions or hobbies that interest you?

WFM: I actually swim competitively and train six days a week, but with Covid-19 we haven’t had any competitions lately. In fact, while I’m answering this question I’m thinking about my alarm going off tomorrow morning at 5:15 for swimming! Argh! Other than that, I also go to the gym 4-5 times a week.

MB: If you were only allowed one album to take with you to a deserted island which album would it be and why?

WFM: Astroworld by Travis Scott. I’m a big fan of his.