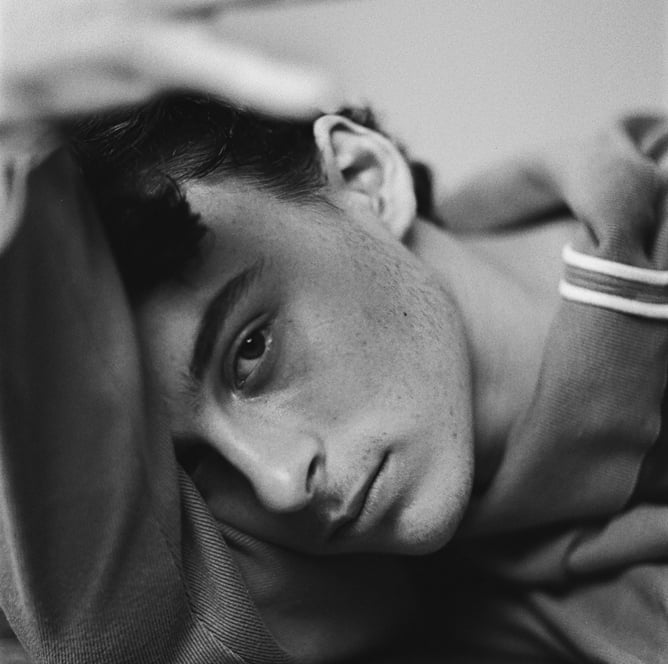 Actor Wyatt Oleff, best known for his role as Stanley Uris in the movie ‘IT’ and ‘IT Chapter Two,’ is just getting started. We catch up with the rising star after the premiere for the second installation of the film based on Stephen King’s famous novel. We talk to Wyatt about his artistic family, Prada, and his verve for eccentric socks.

So the movie ‘IT Chapter Two’ just came out. That’s a big moment. How was the premiere?

I don’t know if you’ve seen pictures from the after party, but what they did was absolutely amazing. They had this whole lot to build a carnival. It was beautiful and we love that everyone loves the movie as much as we do and that they’re so willing to have such a great presentation for it.

A carnival sounds kind of scary. It doesn’t sound like you’re phased at all by the scarier aspects of the film. Were there any moments during filming where you were scared?

There wasn’t really a particular time where I felt super scared. It was comforting to be with all the kids – the losers – and stuff, just cause we’re all such good friends and so it’s easy for us to comfort each other. There were a couple of times where we were surprised by things like seeing Pennywise for the first time on set or the projector thing when we actually saw what he looked like.

It was all a big shock to us. But yeah, you know, we always had each other, so it’s nice to have that comfort always around you.

Had you seen the original ‘It’?

Of course. You kind of have to if you’re going to be in a remake about it, you know.

How is the second film different from the first?

Yeah, it was different from the first in a lot of ways. I’d say the biggest one was that it’s not about the kids anymore. It’s about the adults and their story. We weren’t on set as long as we were for the first one. It’s great because we get to tell the other half of this story and it’s lovely to come back for flashbacks. The fact that they had us back was amazing, so we’re just happy to be there.

I was curious what your experience was like being so well known at a young age and in school?

I haven’t really had a lot of interactions with people at school in terms of like, ‘Oh, you’re that kid from that movie.’ I mean, there have been a couple, but it’s mostly with people who aren’t in my grade, which makes it a little less awkward, but everyone’s super respectful of it. And I go to a really good school for that. Even when I have those days where I miss school and I’m gone for a week, they continue to support me. I think staying in school right now is a good move and also staying as grounded as possible.

I also want to ask you about Prada dressing you for the premiere. Are you interested in fashion?

I’ve steadily been growing my interest in fashion especially with the premieres and events. More recently, I’ve been trying to figure out ideas for what I want to wear for the premiere or the press junket, or something like that. I’ve steadily been growing my style. I couldn’t really describe it to you in full quite yet. But you know, I love, I mean my biggest, it’s weird, but my biggest staple is definitely the socks. I wear a lot of funky socks.

Oh, you know like Happy Socks. I wear a lot of Happy Socks, maybe too many.

Let’s see. The ones I was wearing today were like these checkered purple and blue ones. I’m a big fan of patterns as well. So it’s blue checkered like black and white, checkered purple, checkered blue. I’ve got some space, some arrow one, some red dot ones that are kind of asking for it. I could go on and on. I just love patterns.

Is there a lucky pair?

You know, I’d say maybe they’d be my Old Spice socks. I got them from Isaiah Mustafa. He came to set one day with a bunch of Old Spice merchandise and not like I use old spice deodorant, but he gave us the socks. It’s like him on a horse. I’d consider those pretty wacky.

Do you style yourself?

Casually. I’m kind of getting assistance from my mom and a stylist. I’m trying to figure out exactly what I want myself to be in. And like I mentioned earlier, I’m a big fan of patterns. So recently with the press junket I did with Prada, I had a lot of stuff with patterns and layers on it. I like to express a lot of different ideas with my choice of clothing.

You mentioned your mom, she’s an artist, right? Has she been influential in the sense that you’re in the performing arts?

Yeah, she’s definitely more on the visual arts side of the family and so is my grandfather. In my Spanish class I often don’t pay attention as much and I’ll actually just draw in my notebook. I like to just sit down and draw weird things. I get that from my mom, definitely. I’ve asked her for tips and advice and she’s obviously been very helpful with that.

Do you do any sort of preparation to get into a character?

Yeah, a little bit. Definitely getting into the role of Stanley Uris was really interesting because our acting coach for the movie, Benjamin Perkins, gave us all these pamphlets with a bunch of 80s information on them. One of the things was a song that was the most popular at the time. I thought, ‘Hey, I’m going to create a playlist that I think would be all of Stanley’s favorite songs.’ I kind of fell asleep to them every night.

I think it was ‘Forever Young’ by Alphaville, and a bunch more I can’t think of, but it’s on Spotify. I’d say it’s worth a listen. Yeah, something as simple as that helps get into the mind of the character in a subtle way that you don’t even notice.

Are there actors, or maybe I should say characters, that you admire or have had a profound impact on you?

I’d say for me Leonardo DiCaprio in “Once Upon A Time” was absolutely outstanding. His performance really shocked me in a good way. That level and caliber of acting is so brilliant to me that I can’t even see myself getting there because it’s so out of this world.

That’s a good question. I recently got to do a Netflix show with my co-star from ‘It,’ Sophia. And although the character is still named Stanley, I did play a different kind of Stanley. He’s a little more outgoing and especially with his clothing, which is interesting. You’ll see that when the show comes out. He’s got some unique outfits to say the least. It’s definitely fun to play that kind of comic relief character. It’s new to me as well. A new opportunity is always appreciated.

But I think I really want to delve into more dramatic roles in the future. I have a lot of fun doing dramatic scenes. It feels like what I want to do. When I’m in those moments I’m like, ‘I’m feeling great.’

It’s like when I’m doused in rain and I’m ready to go. I want to act and I want to do what I love. Acting for me right now is when you’re at the peak of your emotions and I love doing that because if you’re angry, you can be angry and have an outburst and that’s because it’s your job. But also, you know, delving into deeper, what’s the word, damaged, I guess, damaged characters with a lot to convey is something I want to delve into as well.

Tiffany’s opens its vault in Shanghai