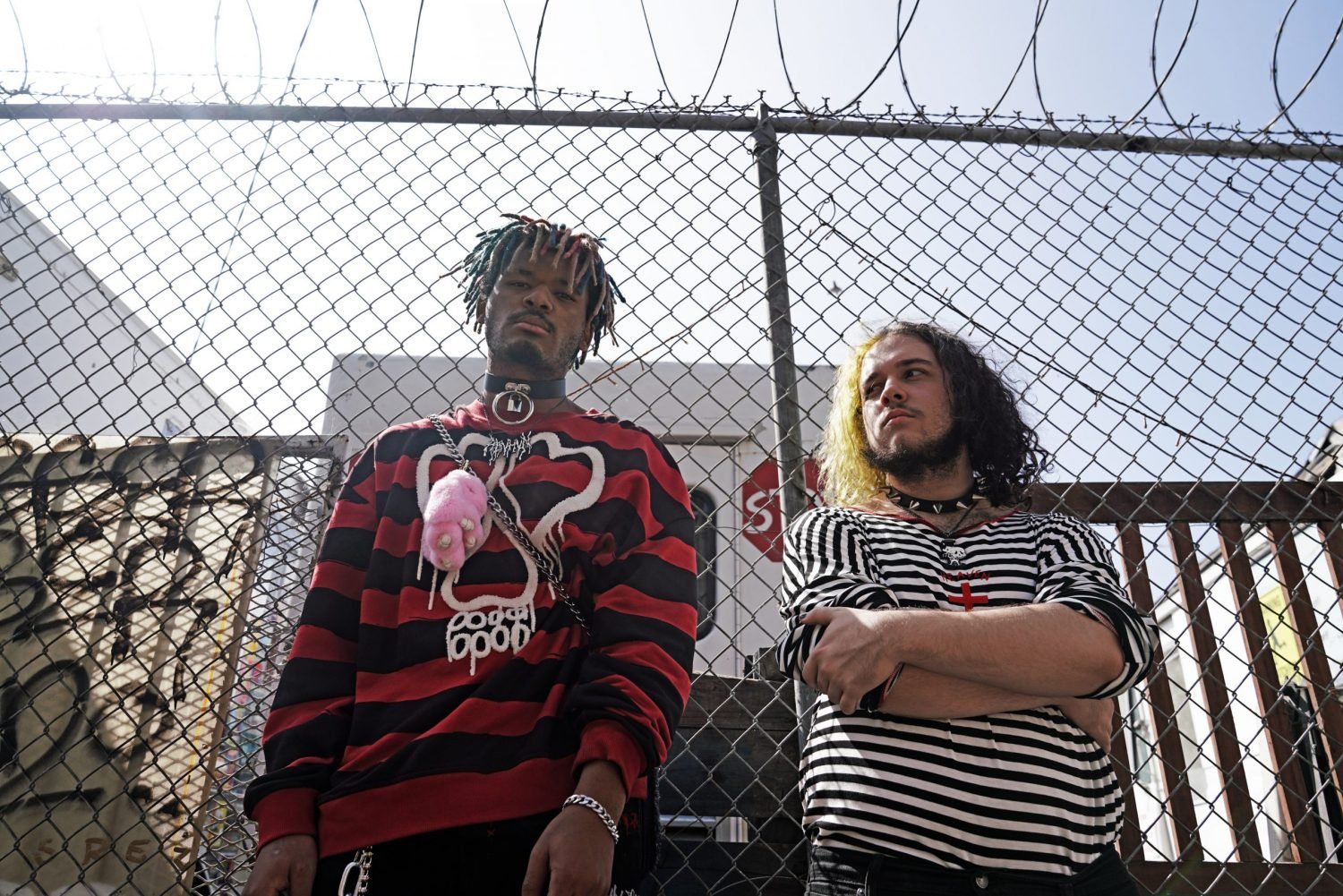 “Punk rock will never die, until something more dangerous replaces it,” Jello Biafra of the infamous punk rock band the Dead Kennedys once declared. Well, that time may have come. Meet WHOKILLEDXIX, the glitchcore duo comprised of Young Skayda and Karm the Tool.

Rather than come up through the esoteric corners of a dusty record store, the duo has garnered an impressive following in an unsuspecting place: TikTok. The band knows all too well. One lyric, “molly rocks in my green tea” made its way around the app; all the way from Alt TikTok to the page of Charli D’Amelio.

This lyric came off their hit single, “Kismet” (below). The song takes listeners through a delirious blender of genre bending sounds, sharp lyrical quips, and a beat so off-kilter you don’t know whether to love it or hate it at first listen. But it’s this mysterious allure of a new sound, sitting somewhere between trap and punk, that keeps you listening.

There’s something of an angsty nagging, a reaction to existential crisis, and information/sensory overload that an entire generation can relate to in WHOKILLEDXIX’s music. It almost seems to be screaming there’s a glitch in the system. Rain caught up with Skayda and Karm to find out more about what this glitch is and what WHOKILLEDXIX is doing about it.

Mark Benjamin: How did WHOKILLEDXIX get started? Is the band name a reference to SlipKnot?

WHOKILLEDXIX: We actually started in a band called PartyMouth. We were playing punk rock music for the longest time, but the problem was that we could never really click with any of the people who tried to play with us in the past. So, we gave up on trying to be a whole band and just started the duo WHOKILLEDXIX. The name itself is just something random. We were really into the underground dark trap scene at the time so we wanted a name that sounded sinister and trappy.

“Sometimes the song is already in our head and we just need to map it out, sometimes we only have the lyrics or we only have the beat, and most of the time we go into the studio without an idea in our heads. We just want to walk in and start creating whatever.”

MB: How did your sound develop? Do you go into the studio knowing exactly how it’ll turn out or is there a bit of alchemy in the process?

WHOKILLEDXIX: We’ve been practicing various styles of music and instruments throughout the years. Our sound changes very often because of our genuine interests in experimentation. We love learning and trying new things. Like we said, we originally did punk, then we started WHOKILLEDXIX to explore rap.

Since then, we’ve decided to not limit WHOKILLEDXIX to rap music and we started throwing in all of our other influences. The process really varies every song. Sometimes the song is already in our head and we just need to map it out, sometimes we only have the lyrics or we only have the beat, and most of the time we go into the studio without an idea in our heads. We just want to walk in and start creating whatever.

MB: What kind of music did you listen to growing up?

Skayda: I listened to a lot of rap, punk and thrash metal. 50 Cent, Trash Talk, Pull Out Quick, Metallica. All types of influences.

Karm: I actually listened to a lot of video game soundtracks and metal growing up.

MB: “Kismet” turned into a phenomenon. Did you expect it?

Skayda: I honestly didn’t. I wrote the song randomly, recorded it randomly and just sent it to Karm to reproduce it and make it our own. When he received it he immediately told me it was going to blow up and it was one of the hardest tracks he’d heard in a while. Needless to say everyone’s compliments on the song has made me very flattered and grateful even though I didn’t expect it

MB: Someone described the glitchcore sound as something between punk and trap. Would you agree?

MB: How was collaborating with CMTEN on “I LOVE GLITCHCORE”?

WHOKILLEDXIX: It was awesome! It was so sick seeing CMTEN go from his more melodic music to rapping and screaming alongside us. I didn’t even think he could do that, he looks so nice and chill but mans can rage when he wants!

MB: What inspired the music video for Kismet? How’d you pull it off?

WHOKILLEDXIX: We linked with an extremely talented director named Mezzy and his team. He told us the idea about us going into a school and messing it up. Being the little troublemakers that we are, we had no problems with smashing stuff in a school. The crew filmed us and directed us and pretty much told us where to do our thing. After the cameras started rolling, the rest was left to us to rage for y’all.

MB: I thought the warning sound in the beat of “YOUCANTHAVEMYCHIPS” was real genius. What’s this song about?

Karm: I find that adding sound effects to beats is really helpful in making them into their own universe. I think the warning alarm really added a jarring effect to that song.

Skayda: And also I just want to say I’m not even stingy with my chips. I literally go out of my way to offer people my own snacks.

MB: Have you performed live yet? What kind of show would it be or feel like?

WHOKILLEDXIX: We have played live. The shows are just hard pounding and energetic. Every show we’ve played, the fans have not let up and literally have us screaming our lungs out by the end of the show. Moshpits, screaming, shoving & hardcore music, that’s what all of our shows are about. Raw emotion. Our shows are a place you can let loose like a cannon and do things you normally wouldn’t. The logic in your brain just turns off and the only emotion everyone feels is complete rage in that moment. Synchronized rage.