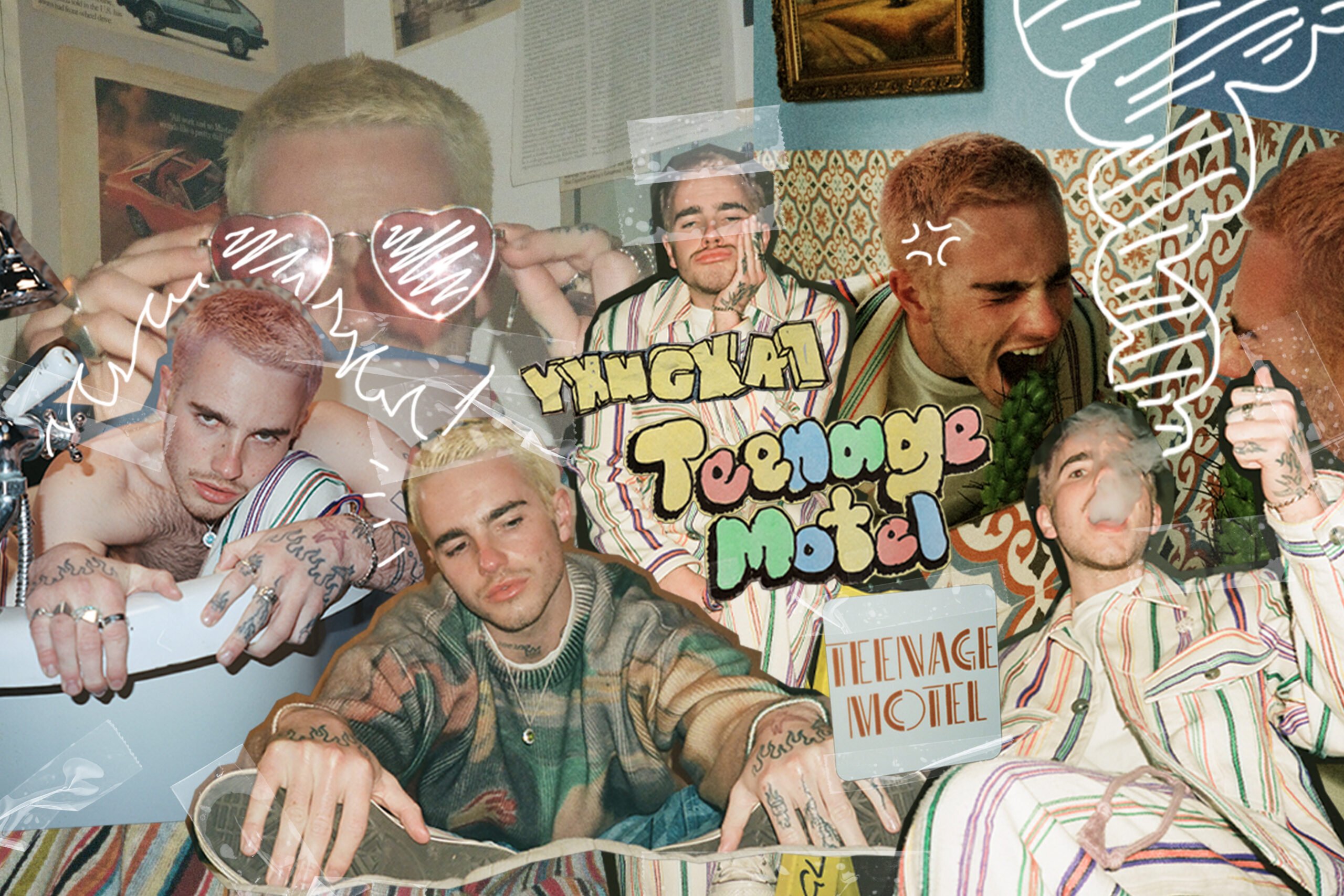 Lo-fi indie rap sensation Yxngxr1 dropped a new album on Friday, Teenage Motel. The new album is inspired by the early romantic experiences that shape us. “Imagine you go on a holiday to LA, or maybe it’s a girl’s holiday where you meet someone. You end up falling in love with this person but just for the weekend. And then you never see them again,’ he explains about the album’s premise to Rain in the below interview.

The emerging musician is taking over the indie-rap genre by nearing over 100 million streams since 2019. Yxngxr1 has been featured on The Guardian and BBC Radio 1. Songs like “Rather Do” and “Tyler” have become essentials for the indie-rap rotation. We caught up with the “Nice Guy (with Morgan Reese)” singer to find out what’s in store on the new album (stream below).

How did you get into music?

It all started when I flunked my exams in school. Everyone was going off to university and I was like, ‘fuck, I don’t know what to do.’ I remember seeing Lil Pump, Ski Mask The Slump God, Smokepurpp coming up on SoundCloud. I thought, ‘it can’t be that hard if they’re all doing it. I’m gonna try it.’

So, I started making music. I sent it to my friends and they said, ‘honestly, you should get a job.’ I did, but after a while I wanted to try music again. l was literally making music on a smashed iPhone 5 for years. Then in October of 2018, I put out my first song. I didn’t tell anyone. I got bit of hate for it online, but I also remember getting a thousand plays in one night.

By the end of the year, it had a hundred thousand plays. I was still working at Footlocker at that point. On the 14th of January, I put out a song called “Tyler,” which is now the second biggest song on Spotify with 29 million streams. From there it grew and grew. It happened so fast over the span of three years.

At the time, I thought, ‘putting out music, this is my final form. This is what I’m going to do. I’m not going to tell anyone it’s me. I’m just going do it on my own because nobody is going to help me.’

I heard XXXTENTACION is a big inspiration for you.

Yeah! Lil Peep, too, for sure. My sound has morphed with layered vocals and where it pans on each side which is obviously a Peep signature. I loved X for his grungy sound and also how Ski Mask flows around on different beats and melodies. I also really appreciate guitars and strings like violins. Rex Orange County, Dominic Fike, Tyler the Creator all have inspired the sound I have today.

How do you approach songwriting?

I started by writing about having a good time. It wasn’t about anyone and it wasn’t addressed to anyone. I would imagine a scenario. Like in “NIGHT OF YOUR LIFE,” I could drive you around in your favorite car, like a nineties film, and we could smoke some cigars. I imagined scenes from classic nineties or eighties or seventies films. Like driving to to the cinema.

As time went on, my songs became real for me and my girlfriend. For example, take the second verse about making out in the basement at your mum’s house. My girlfriend and I are literally doing what that song says, like moving to London. So, we are actually becoming the people in that song. It’s really weird.

Tell me about Teenage Motel and how did this Yxngxr1 project come about?

We started thinking we would make an album called Colours. I wanted to build this massive twenty song album. I wanted to have every song on the track list a different color. As time went on, the songs weren’t molding how I wanted. Instead, we started putting them out as singles and then building EPs around those songs.

Eventually, we had an album and thought, ‘we could name this thing, Teenage Motel.’ They’re like kids in love at this motel. Imagine you go on a holiday to LA, or maybe it’s a girl’s holiday where you meet someone. You end up falling in love with this person but just for the weekend. Then you never see them again.

It feels like real love at the time because you’re so young, but when you grow up, you kind of laugh about it.

Everyone dresses really cool. It’s very UK sick. When we did the last tour in Bristol, Cardiff, Manchester, Birmingham, everyone had their own swag. Everyone dressed their own way and they’re really friendly to each other. It’s always the best thing. They’re all so cool.

Talking to fans after the show is so cool, too. We are literally friends. I listen to my music, so we already have something in common. I remember one kid picked me up and held me in his arms. Fucking fair enough. I’m not going to complain.

I’m in my concert era right now. Everyone just wants to vibe after so many years of being deprived of live music.

Yeah, honestly just to be somewhere with everyone else. That’s the fucking vibe.